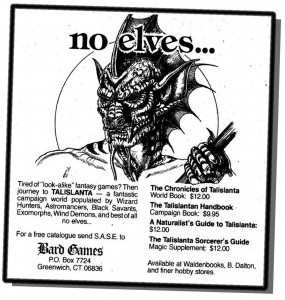 I was fourteen when I first saw that add. It proclaimed no elves in big bold letters and offered a different fantasy game, not your dad’s, well older brother’s, fantasy world. No hobbits or elves, color coded dragons or bearded dwarven maidens. Not this world, no sir! Here you had Astromancers and Exomorphs, I might not have known what they were but I had to find out.

I hunted high and low and some time later while vacationing in Florida I got my greedy little hands on The Chronicles of Talislanta. It presented a unique fantasy world through the eyes of a wizard travelling to this strange world. It was a gazetteer of the nations and people of this exotic land, with no game stats, just an introduction to the world with no elves. I eventually go the second edition handbook and the Naturalist Guide. The world was imaginative and fueled my imagination, it’s very simple system was easy to grasp.

I soon convinced my friends to roll up characters and venture into Talislanta. The visit there was not that successful. In some ways I felt overwhelmed by the details and uniqueness of the setting. It had strange looking characters and names but the adventure felt like a regular fantasy game with different set dressing. I also allowed what I thought was my superficial understanding of the setting’s details to overwhelm me. I learned the hard way why the “look-alike” fantasy campaigns were successful. We may criticize them but even if details may vary, more standard fantasy settings have elements we can fall back on, no matter at whose table we sit. 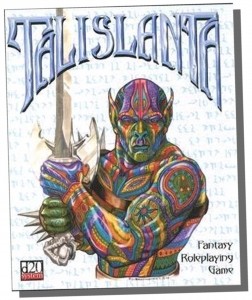 Mind you, all this did not end my love affair with Talislanta, on the contrary. I became obsessed with learning all I could about the setting so I could master it and one day run a proper Talislanta game. Over the years I’ve gotten the different editions, including the D20 version. Though time I realized the world of Talislanta that felt so unique at first had influences of other earlier works I was unaware of at the time, and while there may be no elves, there are cultures that fill that niche even if they have a different color and no pointy ears.

I still love Talislanta and from time to time I take out the first book I got, the Chronicles and give it a read. I highly recommend it. And have I got good news for you! The whole collection of Talislanta games is being made available online in digital form. They are still working on it but many books are already available in the official site, specifically on the PDFs page. So go forth and explore Talislanta, I’m sure you’ll enjoy it.

Enjoy this video introduction to the campaign, it seems to be about eleven year olds, but it gives you a glimpse of the details from the Chronicles of Talislanta that captured my imagination and began my decades long love affair with Talislanta.