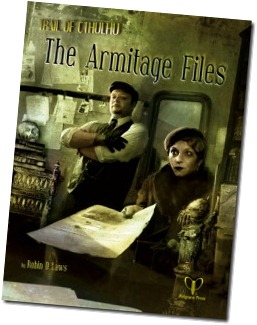 When I first heard about “The Armitage Files” I was intrigued at once (Robin Laws actually mentioned it in the interview I did with him last September)! The 152-paged softcover book is a campaign for the Trail of Cthulhu written by Robin Laws and published by Pelgrane Press. But it’s definitely different from most campaigns you’ve ever read. The Armitage Files doesn’t consist of fully fledged-out adventures that the Keeper has to run in a certain sequence, but it provides the Keeper with ten mysterious documents, supporting characters, locations and artifacts to run your unique version of this epic campaign.

Basically the book provides you with all the tools needed to improvise a whole investigative campaign. Investigative campaign and improvisation? Isn’t that usually contradictory? According to Robin D. Laws it isn’t. And so I gave the review copy I was provided by Pelgrane Press’ Simon Rogers (Thanks again, Simon!) a thorough read to find out, if that claim was true.

The book starts with an introductions that provides the Keeper with some information on what it’s about and how to use it. The files mentioned in the book’s title are ten documents written in the handwriting of Dr. Henry Armitage, . One after the other they mysteriously arrive amidst the effects of his colleagues, but Dr. Armitage has no recollection of ever writing them. And they describe events leading to an apocalypse.

These ten files are provided as handouts in the back of the book that can be copied and given to the players. Alas the documents included in the book are not full-color, but owners of the book can download the full-color versions of the files from the Pelgrane Press site. The handwritten documents contain the clues that should spark the investigator’s curiosity and should enable them to prevent the apocalyptic events hinted at in the files.

The first section of the book describe how the Keeper can use these props to run the campaign and how you can use improvisation in a GUMSHOE system game. The advice given can easily applied to any GUMSHOE game (like Esoterrorists or Mutant City Blues) or even any other roleplaying game. In my humble opinion this already warrants the purchase of this book.

The second part of “The Armitage Files” contains descriptions of people, organisations, places and tomes that may play a role in your campaign.  The character write-ups are fully modular, so the Keeper can pick and choose his version of any given character, it’s even possible to reuse them. Each character write-up also contains short scenes that can be used if the character is either sinister, innocous or stalwart. The same character can very well be either an innocent, totally oblivious of the unspeakable horrors that threaten mankinds existance or he can be an agent of the Elder Gods himself.

The 42 characters can probably be reused in other campaigns as well, which is another big plus in my book. The descriptions of organizations and places basically follow the same format. Organizations can be either stalwart or sinister and there are neutral and sinister descriptions for each location listed.

The chapter about tomes and magic expands on the tomes that are already listed in the main rulebook and can – like the other parts of the book – be reused for other campaigns as well.

Last but not least the book also contains several sample spines that give the Keeper some hints on how the story could unfold. In one case even an example of play is given that should provide the Keeper with a deeper insight on how he can use the material from the book to create a Trail of Cthulhu scenario on the fly.

In a way “The Armitage Files” is much more than a simple campaign setting that provides Keepers with a script for several connected adventures. It’s rather a toolbox that enables any Keeper to not only run an epic campaign focused on the ten mysterious documents but also provides him with an enormous amount of material usuable in any Trail of Cthulhu game and good advice on how to run a game by reacting on the player’s actions instead of following a predetermined script.

“The Armitage Files” is definitely a book anyone interested in running Trail of Cthulhu should own, especially if you want to try something new. But it proves – without a shadow of doubt – that it’s possible to improvise an investigative games if you are open to follow the advice given in the book.