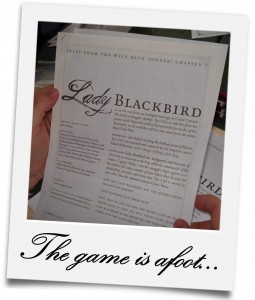 Just to get some expectations out of the way, this is NOT a review of the Lady Blackbird adventure module by One.Seven Design! There are plenty of those out on the Web. This is a great “steampunk adventure module for 2-6 people. It contains a starting situation, setting, pregen characters, and quick-play rules perfect for a no-prep game of 1-6 sessions or more” (that’s the blurb from their website) and I recommend it whole heartedly. This is a post on my experience running the game.

This past Sunday during the Puerto Rico Role Players geeknic I got to run Lady Blackbird. This was not my first choice! Originally I had planned to run a superhero game. If you’ve read my recent posts you know I’ve had that itch for some weeks now. But talking with the other gamers who were coming to the geeknic I figured a more classic fantasy game might be a better choice. The days kept flying by and real life conspired to keep me from preparing properly for the game. The night before the geeknic I found myself with no game knowing there were going to be some gamers there the next day expecting me to run something.

Then along came a Blackbird. My friend Daniel had gushed about the game; written about playing the game and made sure I downloaded Lady Blackbird. I had read through it twice and figured I would give it a try one day, I had even printed out the characters and handouts just in case. I re-read it and readied myself to try something new at the geeknic.

What an awesome time we had! The rules are simple, easy to grasp and encourage role-playing. The one page description of the setting, the Wild Blue, was enough to fire my imagination.  The character descriptions were enough to give players a frame around which to develop their characters. Here is how it went down…

(Beware there are “spoilers”, if there could be such a thing, for Lady Blackbird ahead!)

We started with an overview of the Wild Blue and a review of the very simple rules. I then allowed the players to select their characters and describe how they imagined them. Natasha Syri, the eponymous Lady Blackbird, played by Alexander, was described as a stunning black haired beauty. Naiomi Bishop’s player Sara, described Lady Blackbird’s bodyguard as looking like Pink, the singer not the color!

Joel , who played Cyrus Vance the captain of The Owl, described him as a dashing black haired romance novel cover heartthrob; Kale Arkam was played by Jesús who described him as a non-descript totally forgettable man with some scars from deals gone sour in the past. The last member of the crew, the goblin Snargle, was described by Yanuel as a short big eared purple skinned shape shifter.

The crew started their adventure in the brig of the Imperial cruiser the Hand of Sorrow; I described how the communications officer used a big box with dials and gauges everywhere to send the details of The Owl’s registry over the wireless. The characters embraced the rules and were soon hitting their keys and using their strengths to come up with a plan. Their attempt at fooling the marines guarding the brig by staging a fight did not go well, but Lady Blackbird’s demands that she would not be jailed with these scoundrels worked. While she was being escorted out of the cell they began their escape.

The players were soon adlibbing details, they went with the idea that the crew did not know who Lady Blackbird was and that Cyrus, while attracted to this woman he was transporting, did not recall who she was. Lady Blackbird did remember him when he was a cadet in the Imperial army and she was a naïve teenaged aristocrat.

They disguised themselves as marines and a jailer and escaped through the mess hall corridor, a supply depot and into the hangar, along the way Snargle rescued one of the faeries used in the ship’s lighting system, fought a rhino rat, tensions arose between the commanding Captain Vance, Lady Blackbird and her bodyguard. Lady Blackbird found a rapier belonging to the Hollas the Captain of the Hand of Sorrow, a gift from her betrothed Count Carlowe. The escape was daring and dangerous but The Owl left the hold, avoided fire from the much larger cruiser and hid in the Lower Depths.

After hiding in the Lower Depths and refueling, The Owl made its way to Heaven. I describe the urban sprawls on the world, the fights between rival guilds. The crew set about finding a way to contact the pirate king Uriah Flint. After helping a goblin merchant survive an attack by xenophobic butchers the crew of The Owl found a way to contact the pirate king’s second in command, who Lady Blackbird and Naoimi had also discovered was in Heaven. When they finally contacted Uriah’s man Cyrus finally realized where he knew Natasha from and Lady Blackbird found out Uriah is about to marry the Princess of Krakens! 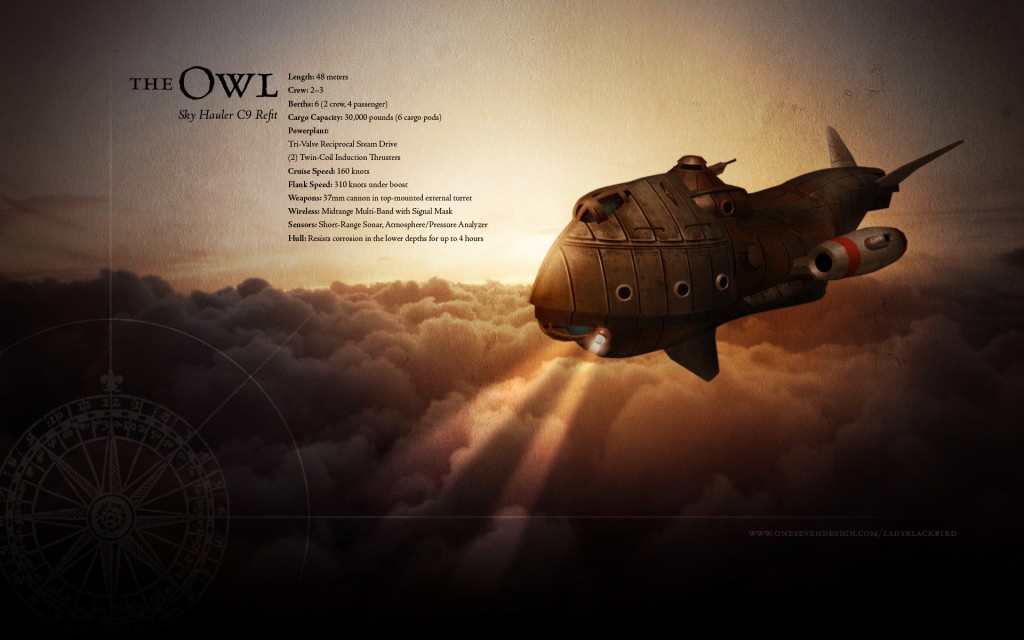 As I ran the adventure I mixed elements of steampunk and fantasy and enjoyed how the rules gave the players control over the narrative in effective ways. They soon found ways to use their traits and tags in creative ways. We laughed and joked about how when I pronounced it the Hand of Sorrow sounded like the Hand of Zorro and Captain Hollas sometimes became Captain haul ass!

What we all agreed on was how much fun this game had been. Someone, I think it was Joel but I’m not sure, said this would be an ideal game to teach someone how to role-play. I agree Lady Blackbird would be a great way to introduce people who’ve never played to role-playing. I don’t think it would easy for someone who has never game mastered to run the adventure. Lady Blackbird benefits from an experienced game master at the helm.

I look forward to continuing this game at the next geeknic. This was such a great experience that when I had to run a one shot adventure for my regular group when two of my players were travelling I decided I wanted to play something similar. I knew my players might not be as thrilled by the steampunk setting, and knowing there are some adaptations of the Lady Blackbird out there I went searching and discovered Alien Survivor. I read it and prepared to play a one session game of sci-fi survival horror with my regular group. This would be another experience altogether!