Over this past Memorial Day weekend my gaming group and I got together for a barbecue and some Dungeons & Dragons.  Normally the games are at my and my fiancé’s place, but with spring and summer here the weather has been nothing short of amazingly perfect.  This last week we have had sunny days with temperatures in the mid to high 70s.

In Juneau, Alaska the summer days can get quite long.  Currently the sun is up by 4:30am and sets at 9:30ish, though it’s still light out for several more hours. Due to this, we have been pushing the start of the games to later in the evening because everyone in our group wants to take advantage of this great weather.   I really can’t blame anyone for wanting to go outside and play in the sun, considering I’m one of them.

We ended up changing things a little this last weekend.  It was going to be the last weekend I would be able to DM for a couple of weeks, so everyone wanted to get one last game in before I would be unavailable.  Everyone was working with busy schedules so none of us where able to make a game later in the day.  One person from our gaming group (will call him by his character name Shadow an Elf Shaman) suggested that we have our weekly game earlier at his place since as he has a big porch and we could all be outside and have a barbecue for lunch.

The idea went over well with everyone so we met at Shadow’s house on Sunday just before lunch.  I got my battlemats all set up along with my Dungeon Master Binder, minis and dice.

This was the first time I had ever played Dungeons & Dragons outside and I was a little worried about the wind causing issues.  I quickly realized my worries were unfounded. The day was not windy at all and Shadow’s house was surrounded by trees.  I imagine it would have to have been quite windy for it to have been noticeable on the porch. 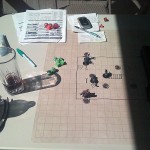 Shadow grilled up some chicken, burgers, and sausages while I did the normal recap of what happened during our last game and got our group of adventures pointed in the direction of their next mission, which was to restore the eye site of one member of our party.  Everyone in the group brought something to contribute to the barbecue.  I brought some Macaroni and cheese while my Fiancé (Erona, a Deva Warlock) brought chips and soda. Our other friends and gamers (Snort, a Half Orc Avenger  and Scorcha, a Dragonborn Sorcerer) also brought snacks and drinks to share.

Time really flies when your playing Dungeons & Dragons.  Our adventurers traveled three days by boat to the island of Nütor in search of a powerful shaman named Roz.  Everyone had learned that Roz might be able to restore Erona’s eye sight. After the end of the first encounter it was time to take a brake and eat lunch.

Our D&D games are pretty relaxed.  It’s not uncommon for us to get side tracked for an hour or more during lunch or dinner to just talk about life, the universe, and everything.

With full stomachs we returned to our game on the porch.  I noticed that the mid day sun had inched it’s way onto the porch and the minis on the battlemat where getting soft from the heat.  We moved the table a bit so it was out of direct sunlight and the party continued to search for Shaman Roz.

After everyone got through the Kobold encounter (an idea I borrowed from dicemonkey.net) and a Harpy encounter my group of adventures finally got to speak to the Shaman Roz.  Thankfully, Roz was able to restore Erona’s eye sight and she no longer required the aid of the other members in her party to explore the world.

It was a good end to a great game with close friends and awesome food. I never thought playing Dungeons & Dragons outside would work. I was presently surprised how well everything worked out. If I have one word of caution it would to take good care of your minis out in the heat of the sun.

Anyone else played an RPG outside? What’s your experience been like?