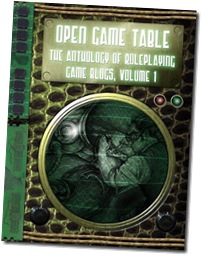 This will probably interest my German readers: The Open Game Table Vol. 1 is now available for 19.95€ at Sphärenmeisters Spiele, my favorite online game shop.

According to fellow blogger Moritz Mehlem, Roland Bahr, the owner of Sphärenmeisters Spiele told him that he will offer the second volume, too, as soon as it’s available.

If you are living in Germany you definitely should check out this online game store. Prices are always fair and often orders are shipped on the same day. Roland usually has even the most obscure games in stock and he even answers questions via ICQ. This is a level of service that you don’t see often these days!