Monday rolls around once more on #RPGaDay2017. So, let’s get going with a quote from the Bard of Avon. posts, thanks for dropping by for a read. Today’s question is:

August 21: Which RPG does the most with the least words?

As stated before, we usually play longer campaigns which benefit from more complex games than the one discussed here, but I love short games for one-shot sessions, for game demos at conventions, or simply to teach people about RPGs. So, what are my pics for today?

I’m a fan of Michael’s, aka Stargazer, game, Warrior, Rogue & Mage. I was lucky enough to be privy to his development of the game. It’s a simple and concise game, but for today’s discussion, I’m going with even shorter games.

The first game that comes to mind when I think of short games is RISUS: The Anything RPG. A short concise 4-page RPG that lets you play any genre. I’ve had RISUS in PDF form for years and have toyed with using it, but never have. I think it is amazing what they do with four pages and the versatility of such a simple system. 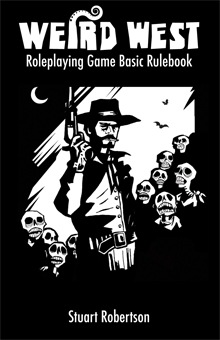 Another short game I did play was Weird West. Michael posted about it when it came out, and I made some characters for a convention game. The game is 8 pages long but it is meant to be a pocket-mod game, so it is tiny. It is a LOT Of fun and I cannot recommend it enough.

For fantasy games, there is Swords & Sorcery Light. It delivers the D&D OSR three level experience two pages. Amazing! Microlite20 is another option, simple, but you need to use the SRD for the spells.

And then there is Grin by Arcana Games. A short one-page horror RPG. I must say that it is so simple and elegant that I want to run a game using it. Really impressed by this game. It does a lot with very few words.

Where do you get your out-of-print games? Let us know here in the comments or tag us in social media.