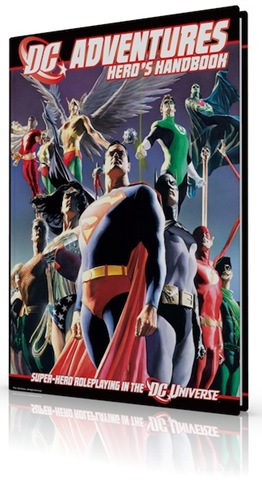 As soon as it was available, I decided to preorder the DC Adventures Hero’s Handbook from Green Ronin Publishing. Although I never actually had the chance to run a superhero game I really like the genre. I very much enjoyed reading Mutants & Masterminds, and since DC Adventures is our first chance to have a look at the new M&M 3rd edition rules, I decided to give it a look.

I have to admit I am not a DC fan. I think most of the comics I’ve read so far have been either by Marvel or one of the independent publishers. But perhaps I will do some more research into DC stuff, now that I own the DC Adventures game.

What pretty much surprised me was that the M&M 3E rules feel very different from 2E. While it’s basically still using a d20 System variant, they’ve made a lot of changes starting with the attributes. Attributes are now ranked from –5 to 20 (Superman has strength 19 for example) and are directly added to the rolls. So the attribute rank is effectively the attribute bonus in itself. That was a good move in my opinion.

The layout is pretty good and the artwork is top-notch. But since we are talking about a licensed product here, this is not really surprising. That’s how a superhero roleplaying game is supposed to look like. I hope the hardcover book looks as good.

What I really like about the book is that it still supports a huge variety of settings. All of the M&M archetypes are still there (when I am not mistaken) and the game seems to have the same toolbox character as M&M 1st and 2nd edition had.

The preorder for the hardcover book sets you back $39.95. Preorder customers are offered the PDF version of DC Adventures for just $5, the normal price is $20. Why they don’t provide the PDF for free when you preorder the game is a mystery to me, because that’s what they’ve done with Dragon Age. But the $5 deal isn’t that bad. For me it is definitely worth it. You can order DC Adventures in the Green Ronin Online Store.

I haven’t had the chance to give the book a proper read, so it might take some more time before I can write a review. But from what I’ve seen so far, they made some interesting changes to the M&M ruleset and while it’s a DC licensed product, you can probably still run every kind of superhero game with it.