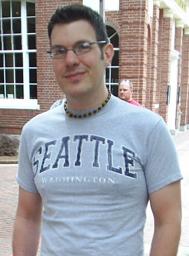 As part of my love for all things ICONS I recently contacted the author, Steve Kenson for an interview about the game and superhero role playing games in general. Steve was kind enough to answer my questions quickly despite his busy schedule and was an all around great guy!  I want to publicly thank him for taking the time and for all the hours of gaming fun he’s provided though the games he’s designed.

Without further ado, here is the interview…

Sunglar: Thank you for the opportunity to interview you. I know some topics may have been addressed in other interviews or blog posts, but I’m asking them for the benefit of Stargazer World’s readers who might not have read those. Can you tell us who you are, and what you do in the gaming industry?

Steve: My name is Steve Kenson. I work as a staff designer for Green Ronin Publishing and also as a freelance designer and writer for other RPG publishers.

Sunglar: How did you begin playing role playing games?

Steve: I came across a first edition boxed set of GAMMA WORLD when I was 12 and begged my parents to buy it for me. I spent quite a bit of time rolling up random mutants, and then convinced some of my friends to play it with me. That led to playing D&D and countless other RPGs in the years sinc

Sunglar: What was your first superhero role playing game?

Steve: Villains & Vigilantes (which I just recently re-purchased from RPGNow). My middle school friends and I played ourselves, as the game suggested, as students at a school for young supers. My character had laser powers, as I recall.

Sunglar: What exactly is ICONS?

Steve: ICONS is a new superhero roleplaying game, designed by me and published by Adamant Entertainment.

Sunglar: What makes ICONS different from other superhero role playing games out there?

Sunglar: How does ICONS compare with your other creation Mutants & Masterminds? What similarities are there, what differences?

Steve: Both games look to emulate the comic book superhero genre. M&M does so with a fair amount of attention to detail, whereas ICONS paints with broad strokes. Both games play quickly, but ICONS is more description focused and M&M more rules focused.

Sunglar: Can you tell us about the mechanics used in ICONS? What makes them unique? What was your inspiration?

Steve: ICONS draws a lot of inspiration from prior games like Fudge, FATE, Feng Shui, and Marvel Super-Heroes, to name a few.

Sunglar: ICONS has random superhero generation rules, as well as including a point buy option. Do you think random generation encourages the feel you want for the game?

Steve: Random hero creation is a big part of why I wanted to create ICONS. I liked the idea of a quick design system that would provide inspiration and even challenge players’ imaginations to build interesting heroes around a collection of game traits.

Sunglar: When you say ICONS is inspired by “old school pick-up style superhero RPGs” obviously the classic Marvel Superheroes RPG comes to mind, were there any other significant influences that come to mind besides that game?

Steve: The aforementioned Villains & Vigilantes was my introduction random-roll superheroes, so there was certainly some inspiration there. Spirit of the Century (which I ran a fun game of) was also an inspiration.

Sunglar: How much of FATE is there in ICONS?

Steve: A fair amount of inspiration. I referred to ICONS as “FATE-inspired” rather than as a FATE branded product. There are a lot of similarities: the scale (what FATE calls the “ladder”), aspects, Fate/Determination points, etc., but the scale is different and ICONS handles aspects and the game mechanics of things like Determination somewhat differently.

Sunglar: What other ICONS related projects are you involved in?

Steve: I’ve written a few ICONS adventures. The first was released as a pre-order special and two others will be released as regular products from Adamant.

Sunglar: Seeing that superheroes are so popular, as evidenced by games, movies, animation, and the ubiquitous nature of comics in our culture, why do you think supers games don’t have a bigger share of the market?

Steve: Three main reasons that I can think of offhand: First, because D&D was the first RPG, fantasy has become and tends to remain the default genre. Second, comic books are a very visual medium, so superheroes may tend to do better in visual presentations like animation, films, or video games. Anything can be possible graphically. Lastly, some RPG players might find the standards of the superhero genre restrictive compared to more blood-and-guts genres where you can kill monsters.

Sunglar: The release of ICONS seemed to signal a renewed interest in superhero games, if the product offered in websites selling electronic copies of role playing games is any indication. With the upcoming new edition of Mutants & Masterminds and the DC Universe game, do you think we are seeing a golden age of superhero rpgs?

Steve: There is certainly a wealth of choice when it comes to superhero RPGs on the market. Between new games like ICONS and DC Adventures, resurgent old school games like Villains & Vigilantes, and old standards like Champions, there’s pretty much a game for everybody out there.

Sunglar: I would think that the dynamics of team centered comics make them ideally suited for role playing games, but in my experience superhero games are one of the most difficult genres to run. I really like how ICONS deals with team dynamics. Do you think superhero games by their nature more difficult?

Steve: Not necessarily more difficult, but different. Superhero stories differ from a lot of other types of adventure stories. Superheroes are often more reactive, and more supportive of the status quo, than the main characters in other genres, who are often loners or rebels or looking to overthrow the status quo.

Sunglar: Has the popularity of loner, brooding anti-hero types affected the dynamic of superhero role playing games? Does ICONS support this style of superhero?

Steve: It certainly could. ICONS doesn’t presume what a hero’s motivations might be, simply that the heroes should have strong motivations. So you could use the game for a darker, more brooding type of game.

Sunglar: Do you think ICONS, both mechanically and/or thematically, offers the DM tools to make running superhero games easier?

Steve: One element is that ICONS puts the burden of the die-rolling in the players’ hands. They make all the tests, either actively or passively (their hero trying to resist another character’s action). This frees up the GM to focus more on the narrative elements of the game, including bringing different aspects into play.

Sunglar: How accessible is ICONS as a game for new gamers?

Steve: Hopefully, it’s easy for a new gamer to pick up and play, just like 12 year-old me picked up GAMMA WORLD and spent all that time rolling up mutants. I’ve read a number of stories about folks playing ICONS with their kids, which is very gratifying to hear.

Sunglar: What does it offer for the older gamer who has tried other superhero role playing games before?

Steve: Ideally, ICONS offers a quick pick-up game that is easy to run on the spur of the moment, is fun to play, and brings back some fond memories of superhero games past. Whatever the case, I hope that gamers old, new, and in-between have fun with it!

And that’s about it for my very first interview for Stargazer’s World. Let me reiterate my thanks to Steve for his time and patience. Here is looking forward to all his future projects.

Which fantasy writer am I?

I laugh and I cry at Knights…