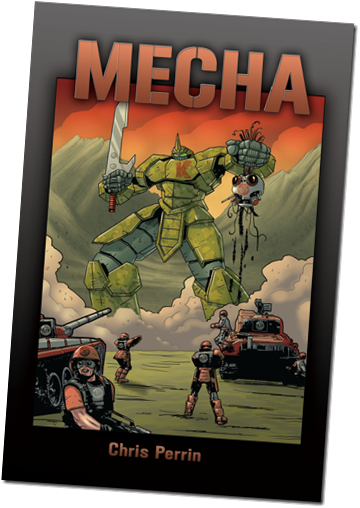 I love the mecha genre! I remember back in the 80s when we got cable TV I watched Robotech on some British TV station, although I couldn’t understand most of it. It has been many years later when I finally had the chance to rewatch the series. And this time I could finally understand what’s going on. But even though the language barrier kept me from fully enjoying the series, I was intrigued. So it’s no surprise that I played a lot of Battletech back in the day. In the mid-nineties I finally got my hands on the Robotech roleplaying game, and while I will probably never play it, it’s still one of my most prized possessions. Over the years I have watched a lot of mecha anime and bought quite a few games which featured giant robots.

But alas most of the games don’t get what the mecha anime genre is REALLY about. While giant anthropomorphic robots are cool, it’s not really the focus of the shows. It’s the characters. That’s probably a reason why I enjoyed Michael Stackpole’s Battletech novels so much. They were not endless descriptions of battles but filled with politics and intrigue.  The characters were believable and the pilots were more important than the ‘mechs they were piloting.

Chris Perrin’s Mecha is a mecha roleplaying game that gets it right. The focus of the game is definitely on the characters, roleplaying and story. If you are looking for a super-crunchy game where you can build and pilot super-complex mecha, you probably should look elsewhere, but if you enjoy the genre for its characters and stories, Mecha might be the game for you.

Mecha is a 168-paged book containing all the rules you need to play plus three sample campaign settings. As I mentioned before, the system used in Mecha is pretty rules-light. Each character is described by four stats (Strength, Agility, Intelligence and Will) plus six skills. Mecha use the stats Weapons, Armor, Technology and Speed. After generating stats for your pilot (all characters in Mecha are pilots) you have to decide how you want to link your stats to your mecha’s. That’s where the fun starts! It should be immediately obvious that a character who links his Agility to the mecha’s Weapons is quite different from someone who links Strength to Weapons.

Linking Armor and Strength. In this case, the pilot and his mecha are tough. The pilot is not going to run or even do very much to dodge, choosing instead to take the hit so they he can hit right back. Linking Armor and Agility is just the opposite, where the mecha relies on dodging and not being where the enemy is attack to avoid damage.

The so-called link array is determined at character creation and will not change during play. Another important aspect of character creation is picking a mecha configuration. Each configuration grants certain bonuses and also determined which traits the pilot can pick. A pilot of a mecha with “Defender” configuration is either “Foolhardy” or “Protective”. When the character switches configurations, the traits change as well. This simulates the common trope of the anime mecha genre, that the character of a protagonist changes with the mecha he pilots. This might be a bit weird at first, but it fits the genre very well and creates a lot of roleplaying opportunities.

The dice mechanic is a simple dice pool system. Whenever you make a roll the GM decide which attribute and skill are relevant. You then take as many dice as the attribute’s rank and each die result equal or less than the skill tested is a success. Usually one success is sufficient. In the case of opposed checks the character with more successes prevails. The system doesn’t get much more complicated than this. 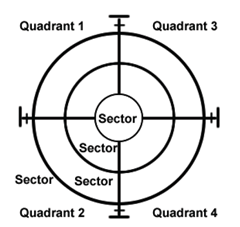 Instead of what you might suspect, Mecha uses an abstract combat system. Core of the combat system is the Bullseye Battlemap which is used as an abstract measure of the relative positions of mecha, infantry or buildings on the battlefield. As I haven’t run or played the game yet I can not judge on how good this works at the game table, but on paper the concept looks intriguing. I also like that the game encourages players and GMs to use narration to make combats more exciting:

As such, it is highly encouraged that instead of just rolling dice and comparing numbers, players narrate how their mecha is moving. Is the mecha crashing into buildings, leaving a trail of destruction behind it or is slowly advancing, using the surrounding buildings as cover? Either way, the mecha will still move the same number of Movement Points, it should still help create a more enjoyable mecha story if the whole table gets a visual of how the mecha operates.

I don’t want into too much more detail when it comes to the rules here. There’s a quickstart PDF of the game available for free, that should give you a good overview of the system. If you are into rules-light systems, you should feel at home with Mecha. Ok, there are two things I should probably mention: Overdrive and Cut Scenes.

Overdrive is the most important resource available to players and special NPCs in the game. It can be used to power certain special abilities (as gained by the Mecha configurations) and they can be spent any time to gain a success on a role. Overdrive is gained by making a successful Social roll during a Social scene or rolling 5 or more successes in any roll. Overdrive definitely adds to the cinematic feel of the rules.

Cut Scenes occur whenever a player rolls 8 or more successes. He then may describe his character doing something really spectacular, which may even defy physics. Mechanically you don’t get anything special (aside the 8+ successes you already rolled) but it’s a nice opportunity for the character to shine!

There’s currently only one thing that bothers me about Mecha. It has a scene structure much like you would expect it from a Luke Crane game like Burning Wheel or Mouse Guard. Each session consists of the player’s scenes, the GM’s scene and one combat scene. While this structure helps to get every player a spotlight scene at least once per session, it also adds some meta-game element to the game I feel a bit uncomfortable with. I think I will have to give it a try to find out how it works out at the game table. If it doesn’t it should be easy enough to run it the traditional way.

The gamemastering section of the book has a lot of good advice on how to run a game based on the mecha genre. Most of the common tropes are mentioned and there are good tips on how to balance fights or how to establish a story.

The first setting included with the book is “Revolution Deity Godblind: The Living City”. The Living City is a Utopian/Dystopian city ruled by six gods. Life is reduced to a harshly regulated existence, human lifespan has been severly reduced and freedom is almost non-existent. The second setting is called “Steel Gunner Destiny Tomorrow”, which is set into a solar system with eight inhabited planets. The Arbor Defense Force fights against The Separatist Guard. While “Revolution Deity Godblind” had elements of magic, “Steel Gunner” is strictly military SF. The last but not least setting is “Special Research School” which combines the mecha and highschool drama genres. The players are students at this very school in an alternative 1966 where mecha technology is commonplace. If you ever wanted to play a geek at a high school where mecha football is on the curriculum, look no further.

All three settings come with some background information, tips on how to run them, detailed story arcs, NPCs, mecha stats and some special rules. But it should be easy enough to adapt Mecha to run a campaign based on your favorite mecha anime series.

The book concludes with some interesting designer’s notes.

The PDF version of Mecha is just $12 and if you are even remotely interested in the mecha genre, you should give it a chance. It has pretty easy-to-learn rules, three campaign settings and it shows a lot of love for the genre.

Please note that this review is based on a read-through of the PDF version of the book, which has been provided by the publisher.