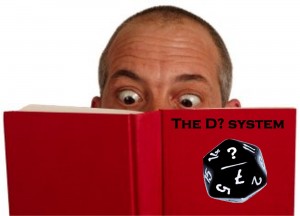 As a long time Game Master I like to try different ways of telling a story. My latest session serves as an example. The previous adventure had ended as the players set forth on a sea journey to a place they had heard of since the beginning of the campaign, a voyage that should take about a month, but they began their travel full of hope, optimism and expectation. The session began with the players in the midst of things, surrounded by undead, being healed by a mysterious ally on the docks of the city they were travelling to. More enemies are closing in and some of their major enemies are at hand!

I gave them a rundown of the situation and rolled for initiative. The fight was brutal, two characters were felled in battle and a major NPC died, another PC near death. The PCs managed to run away from the battle, separated and confused. In the aftermath I turn to my players and say “27 days before these events…”

This is something I have tried before. I’ve had sessions begin with a combat and then work back to how the players got there during the session. Other times I’ve played sessions that have turned out to be a dream or an imaginary story told by someone else about the players. Some instances have been more successful than others and like everything, the more you do it the less of a surprise or a thrill it becomes.

I’m sure I’m not alone in this, ideas have come from endless sources, from RPG advice to the conventions of movies and TV shows. But the structure and nature of a role playing game session make it difficult to use some of those techniques. Foreshadowing and “cut-aways” are probably the easier to pull off. Inspired by the countdown to Za’ha’dum during the third season of Babylon 5 I had a similar countdown going to a major campaign development for about two months, beginning every session by telling the players “so many days until such and such.” They began looking for clues and trying to figure out what was going to happen. When it happened I had created expectations that did not disappoint.

The idea of a “cut-away”, narrating to the players what is going on somewhere else in the campaign, as to give context, create tension or fill in the blanks is something I think I first read about in the West End Games Star Wars RPG. This was a LONG time ago so my memory may not be totally accurate. I think they actually advocated starting the adventure by telling the players how they got there and then play on from there but I loved the idea and took it a step further.

This is trickier. You need players willing and able to separate player knowledge from character knowledge, and require restrain from the GM. You have to resist the urge to tell too much, or to become so enamored with the NPCs that your “cut-aways” overshadow the actual game, the player’s adventures are the main attraction and everything else is window dressing. I’ve used the idea of the cut-away during direct narration, in hand outs written for the game or through electronic communication. I’ll admit to overusing it, especially during my AD&D 2nd edition games.

One of my regular players dislikes the idea of the “cut-away” so much that he asked me to stop using them and for my last D&D 3.5 campaign, which lasted for close to three years, I used NO “cut-aways”. Now I try to limit the use of such resources and typically reserve them for special occasions.

Everybody will tell you not to split the party, but if you ask my players they’ll tell you this is one piece of advice I never follow. Splitting the party allows you to tell stories in different places; explore different plots and create tension. This is perhaps the hardest one to pull off. If you do it in just one session players will be more accommodating, just be sure to pace yourself as a GM and avoid spending too much time with just one character or group of characters.

One thing that has worked in the past is setting a timer and allowing myself just that time to tell their part of the story before moving on to the next character or group, repeating the process round robin. Way back when I had time to play more often I would actually split the party and then play separate sessions with each player, sometimes two or three before they met up again. Now I try to avoid it and despite my desire to split the party I avoid it and keep the party together.

I guess what I’m trying to say is be creative, don’t be afraid to try something new and experiment with ways to tell a story. Let me share some examples of different storytelling methods I’ve used in the past:

Those are just a couple of examples, and I realize the first and the third one are similar, but the players came at them from totally different perspectives. On one they had no clue what was going on, on the other they knew what they were facing and the challenge was in discovering just who was who. 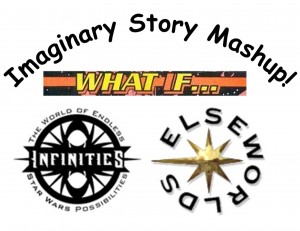 As far as my current game goes I know some of the players believe what they played was a vision or a dream, foreshadowing meant to warn them of upcoming danger. Most were pleased and even those that were a little skeptical were willing to give me the benefit of the doubt, which I am greatly thankful for. But like I told them this is not a dream or an imaginary story. The events that unfolded during the session had a different meaning in light of what they knew was coming. Hopes, plans, long expected reunions and budding relationships were seen differently in light of what was to come. Just wait until I begin the next session with the aftermath of the battle and then tell them, “19 days before this!” Let’s see how the rest of this plays out…

Some parting thought, all this can be tricky. The greatest danger when foreshadowing or playing events in the future is painting yourself into a corner. Setting things up that then become impossible due to character death or losing a player, things that can be oftentimes outside your control. Also be wary of overuse, said it before and I’ll say it again, do it too often and many of these ideas lose their luster and become common place. Lastly, take into account your players, not everybody enjoys these tricks. The majority of my players embrace them but I have one player who gets lost easily (the same one who hates “cut-aways”) so I know that in order to make everybody happy I can use these tricks but I have to keep them short and manageable.

I hope some of these ideas inspire you, please share any of your tips on using non-conventional storytelling methods, I’d love to hear them!

PS – This post is dedicated to all my players who have endured my bat-crazy ideas over the years, especially to Pierre the eternal obelisk seeker (inside joke alert!), Peter who decided to stay back in the past during the supers game, and Sara who got killed in the future encounter only three sessions after joining the group, this killer GM apologizes!