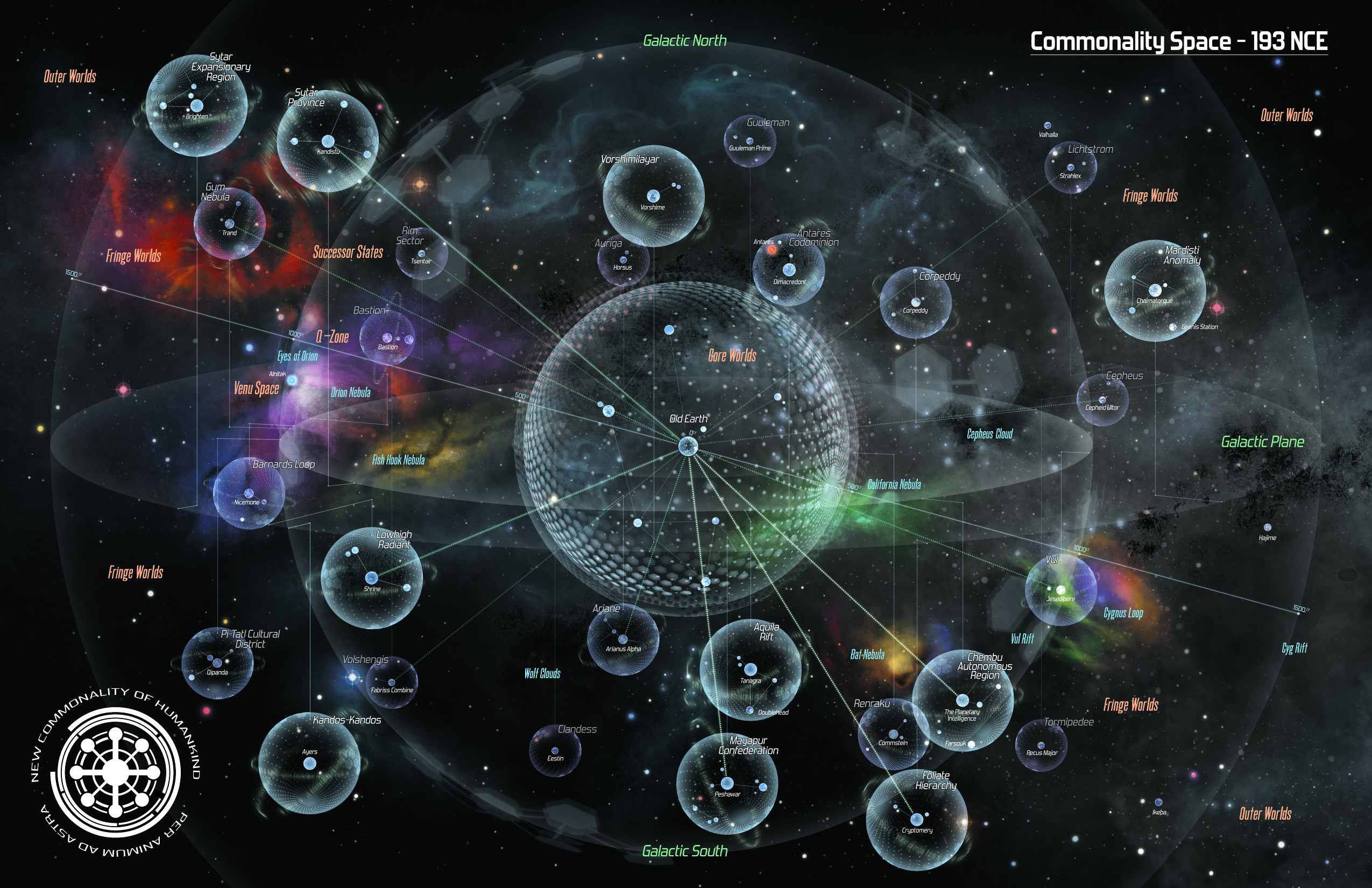 So, I’m jumping on the blog’s Traveller bandwagon! About three months too late… I’ve been working on this review for a while and RL just kept me from finishing it. It was fun as it allowed me to read the book at a more leisurely pace, so I hope to make it justice without spoiling too much of this incredibly imaginative universe.

For the Mindjammer Traveller edition Michael, aka Stargazer, had received the Thoughtcast Edition PDF, a preview of the final book, and asked if I was interested in reviewing it. I jumped at the opportunity, and much to his chagrin then proceeded to take more than a month in getting the review done! To put it succinctly, I loved Mindjammer, the setting, the detail, the production. Is it a good fit for Traveller? I’m not 100% convinced, but hear me out. Let me explain it in greater detail. But first some background.

I knew about Mindjammer since its 1st edition, back when it used the Starblazer Adventures rules. Some friends of mine had played that first incarnation and recommended it. When the 2nd edition of Mindjammer was published, using the Fate Core rules, Michael praised it publicly and privately, writing about it in this post. His post has a thorough description of what the setting is, so I don’t want to retread what he covered. Make sure you check it out… Despite all this, I had not read ANY of its previous iterations. When Mindjammer was published for Traveller 2nd edition, I was ready! 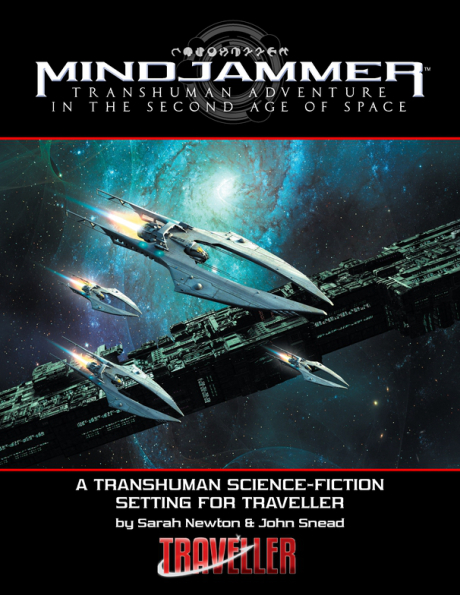 One more caveat! I don’t own Traveller 2nd edition… What? Unqualified reviewer you probably decry. But like other contributors to the blog, I’m a longtime Traveller fan, and while I started with Mega Traveller, I eventually got most of the original Traveller little black books. Later moving on to Traveller the New Era, GURPS Traveller, and even the 1st edition Traveller by Mongoose. I even own a Traveller in Spanish boxed set! So maybe I haven’t read the latest book, but I know a thing or two about the system.

So, does this iteration of Mindjammer work? It is worth your while? The simple answer, yes! This is a splendid written, gorgeously produced, transhuman space opera setting that is incredibly consistent and well presented. Just for the setting information its worth a read. Among the games set in this specific sub-genre of sci-fi Mindjammer is a universe full of possibility that fired up my imagination. The book introduces the setting along with the overview of the rules and how they are adapted for the Mindjammer setting. The seamless integration of setting detail with rules is a constant throughout the book. I felt equally interested in the world they were building just as I learned how the rules apply to it. That’s a fine line to walk, and one they manage flawlessly.

The character creation chapter is a great example of this, the genotype and career information, even when its going over lists of skills or benefits gained, does as much to present the world as it does the rules. This is one of the best character creation chapters I’ve read in a long while. Many such chapters refer to a character sheet as you go along, but often it is reduced to a number list you refer to, but here you learn about the setting, the rules, and how the character sheet helps you along in the process. Graphic design is top notch, forms and sheets are both functional, and aesthetically pleasing. Even the iconic concept of Traveller careers is very effectively adapted to the transhuman setting. How often do Traveller characters spend some of their career experience as an installation? 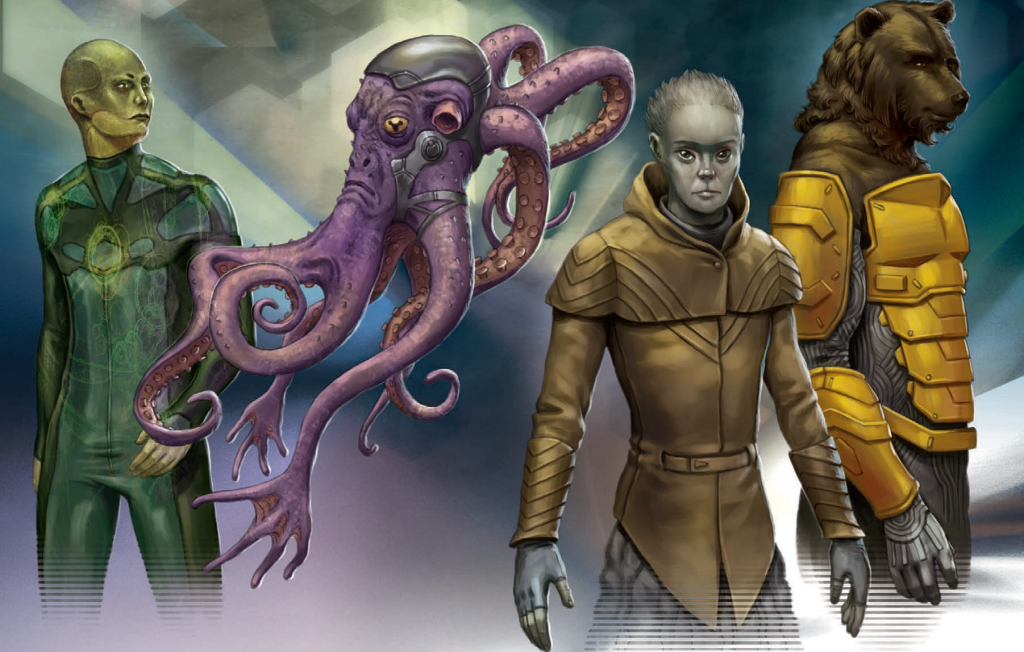 The equipment chapter is very interesting, covering some new ideas for Traveller, and the illustrations greatly enhance what could otherwise be drab item lists. This is another great thing about the book, if you want to play Mindjammer, you’ve got all you need right here, but if you want more toys and concepts to enhance your own Traveller game, this is a great source of information and original ideas. Take the Mindscape for example, while I obviously though of the Net in old cyberpunk games as soon as they began to describe it, in Mindjammer it is so much more! An integral part of the setting that truly makes the game fell all its own. 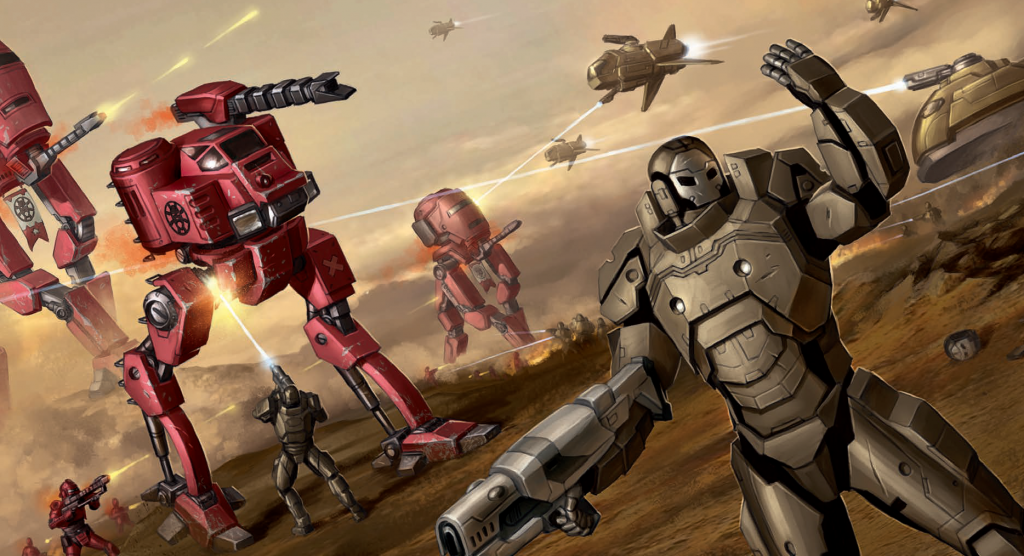 There are rules for ships construction and how they work in the Traveller system. In a game where you can be a ship, well that’s sort of mandatory! But I must confess that chapters such as this one are often my least favorite ones in any Traveller book. The chapter is again beautifully illustrated, sample ships have maps, and they all enhance the setting though the details they present, but this was the one chapter I really had to struggle to finish.

But then I got to the good parts! The organization chapters, on the benefits and rules governing organization was incredibly evocative. Chapter 10, The New Commonality Era covers the setting history background, society, and it so good! Easily my favorite in the book. From history to commerce, Mindjammer feels expansive, immersive, and even when they drop rules in the middle of the discussion its seamless. The Mindjammer universe feels alive! The discussion of cultures, stellar bodies and systems in later chapters only enhances this. The GM chapter is succinct and offers concrete advice on using all the preceding information effectively. There is subsector presented to get you started in your campaign.

Mindjammer is a highly detailed, complete and engrossing. As a setting, it may be a little daunting to take in all this information, but it is so well presented and incredibly accessible. This just may be my favorite transhuman setting!

And now for a nitpick… I’ve always had trouble divorcing the Traveller rules from the Imperium setting. I realize that on its inception Traveller was more of a generic sci-fi RPG, and the Imperium came alive through the supplements that followed, but when I read it for the first time there was this vast encyclopedic knowledge of the setting I was fascinated by. I own the Babylon 5 Traveller book but it never felt quiet right. Mindjammer does an amazing job of adapting what is obviously a solid game system to their setting. From what I gather reading this book, Traveller 2nd edition threads new ground, and Mindjammer takes advantage of this. It really made me want to pick up the latest version of the game. But still it felt like a weird pairing, a bit of a square peg on a round hole, could be my preconceptions showing, YMMV.

Mindjammer for Traveller is VERY crunchy on rules. Since I have not read previous incarnations, I have no point of reference, but have been told even when using Fate, Mindjammer has a lot of rules. Be aware of the fact. But if you’re a Traveller player then that shouldn’t be an issue. On a final note, and this is just my personal taste on display, I would LOVE to see a Savage Worlds version of this setting. Just saying… 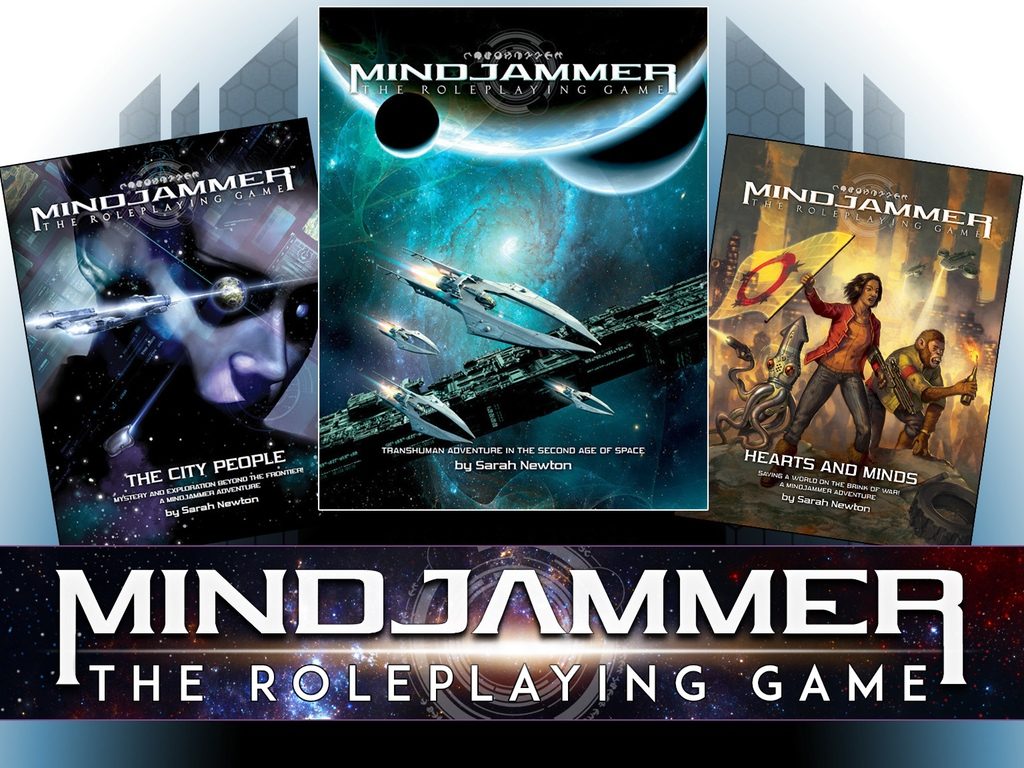 You can get Mindjammer books here, and if you are intrigued by this setting be sure to check out the free Quickstart Rules that allow you to play the game with just your Traveller rulebook.

Have you player Mindjammer in any of its incarnations? How was the experience for you? Anything else you’d like to know? Be sure to let us know in the comments bellow. Thanks for reading!

Dragon Warriors is back