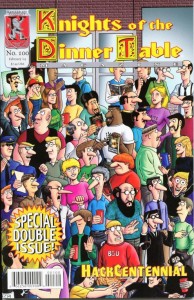 Besides being a longtime gamer I have other hobbies. For the longest time I’ve been a comic book fan, I’ve written about it before (here and here), and even if I don’t read that many these days (Fables, The Walking Dead are among the few that make the cut) there is one comic that I can’t take out of my pull list Knights of the Dinner Table.

I guess games, comics, sci-fi movies and TV series and videogames form a strange vector where many of our hobbies converge, and Knights of the Dinner Table is a comic about games, but the magazine is so much more, besides the humorous misadventures of a gaming group, the aforementioned Knights, and their gaming community, poking fun at games, MMOs, relationships and everything in between; the comic has gaming articles ranging from advice, to NPCs and reviews. The last issued had three NPCs for AD&D 2nd edition, imagine! That was a trip down memory lane for me.

I am amazed at how much I care for these characters! The creator, Jolly R. Blackburn, and the entire Kenzer & Company team have made me come back month after month not just for the jokes but to see what happens to these characters that feel as real as your gaming buddies. I went to their booth in GenCon in 2007 but I was too much of a geeked out fan to muster up the courage to actually talk to any of them, just like with Gary Gygax, guess that puts them in high company in my mind.

So if you have not read it, or only heard about it, I cannot recommend it enough. There are collections of previous issues, their Bundles of Trouble, if you want to catch up to the story and even a free issue you can try (free stuff and it’s not even Friday yet!).

Now let’s see if I muster the courage to send out a submission to them. Getting published in KotD is a dream of mine, but I actually have to send something to even attempt it! Give it a try you’ll not be disappointed.