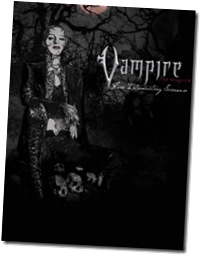 Back in the day I’ve played in a lot of World of Darkness campaigns. I think we almost played every White Wolf game we could get our hands on back then. In an earlier post I’ve detailed what made me turn my back from the WoD later, but that’s not what I want to talk about today.

A couple of days ago I read an excellent post about the new World of Darkness on a German RPG blog. In the article the author mentioned a free Vampire The Requiem campaign including introductory rules that has a page count of about 175 pages. Since I never heard about this campaign before I asked where I could download it and found out that’s actually the Vampire The Requiem quickstart PDF!

The downloads at the official site are down at the moment, but you can still get the quickstart PDF at DriveThruRPG. From what I’ve seen there are similar free campaigns for both Werewolf and Mage. Regardless if you are an old WoD fan or curious about the new WoD, you definitely should check this out!

Oh look, the Magus… and more!