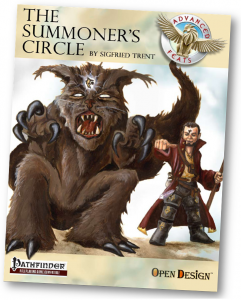 On earlier posts I have reviewed the two previous installments of the Advanced Feats series by Siegfried Trent, Secrets of the Alchemist and The Witch’s Brew, published by Open Design. This third outing, The Summoner’s Circle, focused on another classe introduced in the Pathfinder RPG Advanced Players Guide, doesn’t disappoint. On the contrary I would say that with every installment the series keeps getting better and better!

Open Design was kind enough to provide a review copy of the book and I have put it to good use. While the Alchemist was a interesting read and the Witch’s book helped me create a dastardly villain the players will soon face in my weekly Pathfinder game, the one class that has been in use since the Advanced Players Guide came out has been a Summoner. This book will surely see use at my table. If you are intrigued by the Summoner, itching to play one, or are currently battling the forces of evil with an eidolon at your side, this book is for you.

Like the other Advanced Feats electronic books this is a 19 page PDF (17 pages of actual rules when you discount the table of content and the Open Gamin License page) with a general, but very useful, overview of the class, 30 new feats and three character builds. This book however also covers the eidolon, the mythical creature the Summoner calls to aid him, and includes the builds for the eidolons for the three Summoner builds as well as rules discussions for various details unclear in the rules for “evolving” eidolons (that’s the rule terminology, sorry for any Pokemon flashbacks that might have caused) that could possibly arise when you have a Summoner at your table. Mr. Trent is very mindful of rule balance and shows his excellent grasp of the rules when discussing possibly thorny points.

As usual the feat selection is excellent, from feat that would be useful to any spellcaster, such as Canibalistic Caster, which allows you to take Constitution damage in order to cast spells (and the author recognizes this may be abused and explains so in the commentary for the feat), Clockwork Summoning, which allows your summoned creatures to be clockwork constructs, and Improved Concentration, to feats useful to all classes. In fact I think this is the Advanced Feats book with the most feats usable to other classes beyond the one featured in the book. 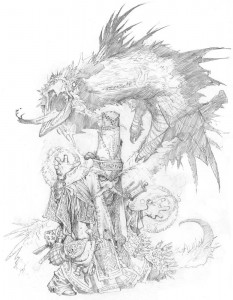 Of course the Summoner is not forgotten in the feat selection. Many play off the strengths of the class and a few eidolon specific feats greatly enhance the creature as well as reinforcing their otherworldliness. A feature I loved on previous Advanced Feats books, the commentary on feats, is present in all the feats in The Summoner’s Circle giving even greater insight into the designer’s choices and the rationale behind them.

The three builds are varied and play off the versatility of the class. One build is focused on controlling the battlefield through walls and such effects, the other is a rider and the eidolon is a mount to be reckoned with and the last one is more a combatant fighting alongside the eidolon. The book finishes with a really useful eidolon record sheet, which is something that makes a lot of sense and is even necessary for this class but I had not thought about, kudos to Siegfried Trent for thinking of everything.

I know you are expecting my mandatory nitpicking and who am I to disappoint. After the wonderful cover last time around in The Witch’s Brew, the cover for The Summoner’s Circle is not my favorite. It features a halfling Summoner and his eidolon, the runes marking the Summoner and its summoned companion are there, and it tries to capture the fun that a Summoner can design the way his or her eidolon looks like, but this eidolon looks like the love child of a rancor and an ewok. That said, the interior art, while sparse, is very appropriate. I loved the silhouettes of eidolons through the book, I think they evoke the mystery and possibility of the creature so much more than the cover.

But don’t be fooled, this is a book that can’t be judges by its cover. The Summoner’s Circle is my favorite book of the Advanced Feats series. It’s only $3.95 and like previous PDFs in the series these 19 pages will get a lot of mileage in any game using the Advanced Player’s Guide. I recommend it; summon it to your game today!