I picked up a copy of Zombies!!! from PAX in Seattle last year. It was a game some of our Alaska friends had talked to us about and said they really enjoyed. When I saw it for sale at the convention I picked it up.

The game play is something I like to call organic. You and the other players start out in a zombie infested town. I can’t stress INFESTED enough either. You deal with a lot of zombies in this game. Game play reminds me of Carcassonne with the tiles. With each turn you and your players are building the town and adding zombies to each tile. The goal is to survive long enough to make it to the helicopter pad which happens to be one of the three very last tiles that is put down. So the helicopter pad could end up anywhere.

As you rummage through town you can pick up extra health and ammunition to help stave of zombie attacks. You just have to be smart about it because there is not a lot of these items.

My group and I played this game on one of our role playing game nights where not everyone could show up. The game was fun, but not one of my favorites. Several people at my table really enjoy the game though so take my opinion with a grain of salt.

Have you played Zombies? Leave me some comments on what you thought about this game. 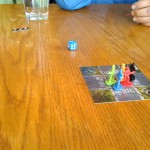 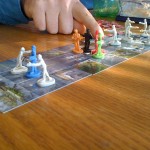 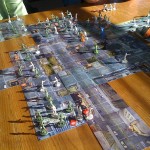 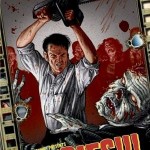