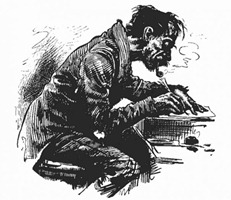 For some time I have been pondering whether I should write a series of blog posts about my second favorite hobby: blogging about RPGs. I asked around on Twitter and the #stargazersworld IRC channel and I got quite a few positive replies. And while I might not be a blogging expert, I think I am around long enough to have learned a few tricks of the trade.

Before starting to give you some advice on starting, running and maintaining a roleplaying game blog, let me tell you what you won’t find in this series. There will be no advice on how to handle advertisements on the blog, no tips to make your blog more SEO friendly or on how to make money with blogging. If you are looking for some information on these topics you have to look elsewhere.

But I can give you some tips on choosing the right blog software, how to get started with blogging, whether you should join a blog network, how to cope with writer’s block and what else is part of a RPG blogger’s daily life.

Please take everything I write here with a grain of salt. There are some things that worked for me, or at least I believe that they worked, and your mileage may vary. That’s why I am still very interested in your experiences. Please let us know in the comments below what worked or didn’t work for you.

Now, that the ground is set, we can start with lesson #1 in the coming days. Stay tuned!