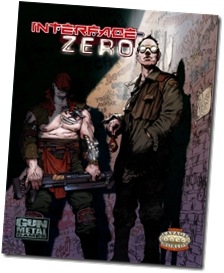 Savage Worlds is among my favorite roleplaying game systems and I was quite happy when I heard that Gun Metal Games was going to release their excellent Interface Zero setting for it. Interface Zero is a modern cyberpunk setting which takes the technological advances of the last decades into account. The problem of most available cyberpunk setting is that they are based on an early 1980s understanding of computer technology. When William Gibson wrote Neuromancer he probably couldn’t imagine the wireless computing we have today. But I digress.

The 301-paged book which is also available as PDF at DriveThruRPG not only contains a highly detailed cyberpunk world set into the year 2088 but also adds several subsystems to the Savage World rules. So even if you’re not going to use the implied setting, you still can make use of the cyberpunk rules for example. Alas these new rules add an additional layer of complexity to the Savage Worlds rules which may not be to everyone’s liking.

The book itself has a full-color cover but the interior is black-and-white only. The layout is clean and the artwork is quite nice and has a consistent style.

In Interface Zero the characters can not only be plain old humans but also androids, genetically improved humans called Humans 2.0, hybrids (which share some traits with animals), or simulacra (which are basically biological constructs unaware of being vat-grown). The addition of these various player “species” adds a bit of transhumanism to the mix, which fits the modern interpretation of the cyberpunk genre nicely.

Aside from a couple new skills and skill uses, Interface Zero adds quite a few new Edges and Hindrances like Gun-Fu Disciple or  Advanced Programming. And no cyberpunk game would be complete without an extensive list of gear for your characters to purchase. In the extensive equipment catalog in Chapter Four you can find everything from a simple boot knife to power armor and experimental energy weapons.

Interface Zero doesn’t contain a plot point campaign but Chapter Seven of the book contains enough short adventures to keep a group of adventurer’s busy for months if not longer. The last and eight chapter of the book consists of an extensive bestiary. The book’s appendix contains not only a very detailed 6-paged index but also a plethora of sheets including a very stylish character sheet.

If you are a fan of the cyberpunk genre and Savage Worlds you definitely should check Interface Zero out. Even if you don’t want to use the included setting, the new rules and the extensive equipment lists may be worth it.