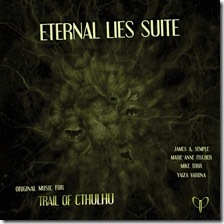 I love using music in roleplaying games since my first GM used the “Nightmare on Elm Street” soundtrack in a CHILL game he was running. Before that we had no background music but I can remember no session without it after that. Music can touch you at a deeper level than the spoken word can and it’s great to convey emotions.

I am also a big fan of the GUMSHOE system. Robin D. Laws is one of my favorite game designers and in my opinion GUMSHOE is the perfect system for investigative campaigns of all kinds. So when I read that James Semple had created music for both Trail of Cthulhu and Esoterrorists I had to buy it immediately. Both Dissonance for Esoterrorists and Four Shadows for Trail are great soundtracks albeit a bit short.

But James Semple, his team (Marie-Anne Fischer, Mike Torr, and Yaiza Varona) and Pelgrane Press didn’t stop there. Recently they released the Eternal Lies Suite as soundtrack for the Eternal Lies campaign for Trail of Cthulhu. I haven’t had the chance to look at said campaign but I had to buy the soundtrack as soon as it became available at the Pelgrane Press online shop.

The soundtrack consists of 27 tracks of orchestrated music. Some of the tracks feature additional sound samples like wind, breathing, etc. but this never distracts from the beautiful music. I own a couple of soundtracks by Midnight Syndicate where the samples actually are quite distracting especially when used as background music. But this is not the case here.

The majority of the tracks are orchestral pieces like you would expect from a horror movie soundtrack. Especially the longer pieces work great as background music for any horror roleplaying game. The last few tracks on the soundtrack are obviously meant for special situations like chases, dangerous situations, and are aptly named "Run!”, “Danger”, “Tension” etc. But I think you could still use those in the background as well.

The soundtrack is available as download as well as on CD and is highly recommended not only for Trail but for any period horror game. According to the official product description the soundtrack was created in a way that you can loop it unobtrusively and the action tracks can be shuffled randomly but still blend seamlessly. I have to admit I haven’t tried that yet, but I will surely do so when I run my next horror game.

You can buy the Eternal Lies Suite as download or CD at the Pelgrane Press Store which sets you back $14.95 or $18.95 respectively. Alternatively the download version is available at DriveThruRPG as well.

What class are you?