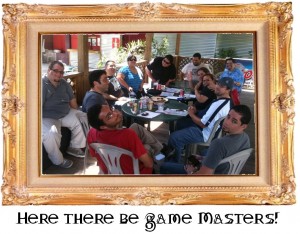 This past Sunday Puerto Rico Role Players held its very first GM Workshop. We’ve had some other activities before, Geeknics, miniature painting workshops, model building, but a friend and fellow member suggested we needed to do something to help Game Masters. So new people get excited about running games, newer GMs can learn from others that have been at it for a longer time, and even those that have GMed for some time learn from others. Thus the GM Workshop was born.

We had to reschedule it once (mea culpa!) but we eventually made it to a local burger joint in the Guaynabo area called John Doe’s, had some burgers, some sodas, some beer, and talked about games. About 26 people made it out to the workshop and we had a semi- formal plan with a group of GMs chiming in about topics such as how to put together a group, whether to use pre-packaged settings or creating your own, and even round robin GMing.

We had a nice mix, a younger newer GM, some old farts; I mean experienced GMs, and everything in between. I hope we get more newbies next time; the more GMs there are the more groups get created and the game community keeps growing. And now you know my nefarious plan!

I was amazed at all the good ideas; I shared some of my experiences and was really excited about all the new strategies and tools I heard about. Some I will use in my game tonight! I would like to thank all the friends, old and new, that made it. The group keeps growing, we are at over 350 members already, and I look forward to future activities together. We have more activities planned, the next Geeknic, a possible Christmas dinner, and people have suggested another minis paining activity, maybe even a terrain building seminar. So many games so little time!

I encourage you to try it in your neck of the woods, get together, exchange ideas and help other GMs become better at what they do. I know I certainly will be thanks to all my fellow GMs who participated in the GM workshop.

Sons of Arcadia: an RPG made in Puerto Rico!

Ask the Readers: Do you know of any gaming supplements where Puerto Rico is mentioned?