Roleplaying games based on licensed material are usually hit or miss. Either they are either utter crap or totally awesome. Luckily the game based on one of my favorite TV series is the latter. Cubicle 7’s Doctor Who Adventures in Time and Space is not only a perfect adaption of the series but it’s also perfectly suited for new gamers. The game’s presentation is flawless and the rules are fast, easy to learn and support the mood of the series. But before going into detail, let’s have a look at the boxed set itself. Yes, the game comes in a boxed set!

Doctor Who Adventures in Time and Space Unboxing

As you can see the box contains not only three rulebooks (86, 140 and 32 pages respectively) but also pregenerated characters sheets, unfilled character sheets, gadget cards and a shitload of story point counters and a full set of dice. Throw in a few sheets of scrap paper and a couple of pencils and you’re good to go! The boxed set really makes it easy to jump into gaming without setting the hurdles too high.

The Player’s Guide starts with a short story set into the Whoniverse called “Shaking the Box” which is followed by a short introduction into the Doctor Who universe and roleplaying. Oh, did I mention that the game is based on the “new” Doctor Who series started by BBC Wales in 2005? It features a lot of still photography from the series, especially the David Tennant episodes. As far as I know an updated version of the game is in the works which will feature the 11th Doctor as well. But I digress. 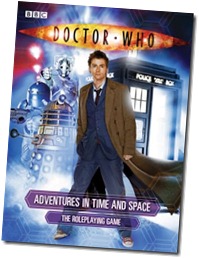 Back in 2009 I wrote a post called “Doctor Who RPG – Could this really work?”. I was really skeptical a Doctor Who game might even work. But this game has convinced me that it can actually work. The Player’s Guide lists a couple of options on how to assemble your team. Aside from playing the established team from the series like The Doctor, Rose, Donna, Captain Jack Harkness, etc., you can also play The Doctor and new companions we haven’t seen in the series, or it’s possible to play a UNIT team, Torchwood operatives or even Time Agents. The rules even allow you to create new Time Lord characters.

Character creation uses a straightforward point-buy system. You get points that you distribute among your attributes, skills and traits. The really interesting part are traits here. They are what make your character really unique. There are good, bad and special traits. Good traits give your character a special talent or ability, bad traits are weaknesses like being Unattractive or Selfish. Special traits allow you to create Alien, Cyborg or even Time Lord characters.

The core mechanic is quite simple. Whenever you attempt a difficult task, you roll two six-sided dice and add the relevant attribute and skill value to the result. You try to beat or match a Difficulty set by the GM. If you roll above or below the Difficulty it may have additional consequences beside succeeding or failing. That might not be the most unique mechanic out there, but it works fine and is easy to learn even for new players. 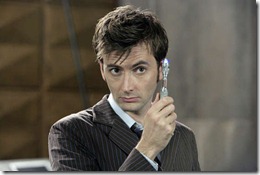 When it comes to conflict rules you’ll notice something pretty uncommon in roleplaying games: fighting is actually the worst option. At least when it comes to initiative. In Doctor Who Adventures in Time and Space Talkers act first, followed by Movers and Doers. So you want to fire that gun or throw that punch? Wait until everyone else is done talking, running and doing something. This rule actually helps a lot to emulate the tone of the series and it’s a welcome change to the usual “shoot first – ask questions later”. The rules actually advise to avoid gunplay if possible. Hiding and sneaking and talking down enemies is actually much more in line with what we expect from a Doctor Who game anyway.

In the description of the box contents I mentioned Story Points. These are a meta game currency the players have access to that they can spend to get additional clues when they are stumped, add something to an important roll, tweak failed result to save themselves or bend the story in favor of the players. Gadgets come with their own Story points, too. So they can be used for tasks they were not really designed for. The number of ways you can use your Story Points to do the exceptional are countless.

The Gamemaster’s Guide contains all the rules from the Player’s Guide but a) in more detail and b) described from the GM’s standpoint. In addition to that it explains how to run games, design adventures and gives basic gamemastering advice. A major portion of the Gamemaster’s Guide covers Time Travel. No Doctor Who game would be complete without it and in my opinion time travel is one of the hardest things you can do in a tabletop game. Especially paradoxes can be a major pain, but the book gives good advice on how to avoid them. It also explains what happens when you really screw up. Do you remember the Reapers from the episode where Rose tried to save her father? Yup, they are in the book as well.

The Gamemaster’s Guide also contains a lot of information on the Whoniverse, Timelords, the TARDIS and the aliens you might encounter on your travels. All the basic adversaries from the series are covered like the Dalek, Cybermen, the Ood and even the Autons. Some of those aliens can even be played, if the GM approves, but some of them might not be suited for every campaign.

The Adventures Book contains two complete adventures and a whole bundle of adventure ideas you can use as inspiration for your own campaigns.

Overall Doctor Who Adventures in Time and Space is a great roleplaying game for fans of the series. It doesn’t matter whether you are a new gamer or a gaming veteran. The rules are easy to learn and are perfectly suited to the tone of the series. I’m not sure if I would recommend the game to someone who doesn’t know the series, but it’s a must buy for every fan!

By the way, the game is currently on sale on the official Cubicle 7 store. You can get the boxed set + PDF bundle for the low price of $36! You can also get the PDF version from RPGNow for $34.99.

Please note that the review was based on a review copy of the boxed set provided by the publisher.