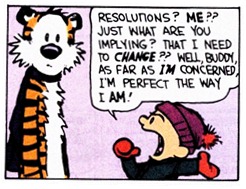 Before talking about the plans for 2012 let’s have a look back at the last year. Back in January 2011 I set one goal for 2011: play more. And while I discovered Google+ Hangouts as a perfect medium for online gaming, I didn’t actually achieve that goal. When I am not totally mistaken I did actually play less than in 2010. Scheduling has been more difficult than ever and a lot of the plans I made fell flat in the end.

But that doesn’t mean I have given up. So my first gaming related resolution for 2012 is the same as last year: play more. We actually scheduled our first game for the second weekend in January where I want to wrap up the Call of Cthulhu game from New Year’s Eve.

But aside from that I want to run a campaign from start to finish in 2012. It doesn’t need to be long, but a story arc that covers at least a dozen sessions would be a nice change. I have a couple of ideas what I would love to run in the new year, but before making any plans I should consult my players. More than once I’ve made plans for a game that I never ran because I couldn’t interest my players in it.

One of the things I would love to do is running a sandbox campaign with Lamentations of the Flame Princess. I recently got my print copy of Carcosa and I utterly love that book. The setting is extremely weird, has a lot of Lovecraft influences and looks and reads great. I’ll also have to think of a way on how to make use of Vornheim, too, since it’s another book I would like to use someday. I am not sure if my players are into old-school D&D, but it might be worth a try.

When it comes to game design I still have a couple of unfinished projects on my harddrive that need some more work. So another goal for 2012 is to at least finish one of those projects. Heck, perhaps I should resurrect the Gearbox project or finally finish that game I’ve been working on in secret for way too long…

So what are your gaming resolutions for 2012? Please share your thoughts in the comments below!