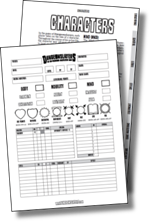 Reports that the English version of Dungeonslayers 4 is vaporware are highly exaggerated. DS 4 is alive and well and Christian Kennig has released the updated character creation as a teaser today!

The 10-paged PDF contains the character creation rules, hints at the new hero classes that you can pick after reaching level 10 and gives you the opportunity to check out the artwork and layout of the upcoming book.

By the way, the German version of the game is available in a very cool boxed set, or as a free PDF version. So if you can speak German, why not check it out now?

One thought on “Dungeonslayers: First sneak peek at the 4th Edition”