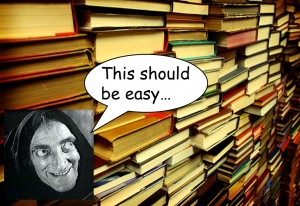 I’m on the last leg of my current Mutants & Masterminds Dawn of a New Age campaign. It’s gone on longer than I planned and we are having a blast, I am really pleased with the campaign and once we finish I plan on doing a retrospective for the blog. But the campaign has a few months to go, so this is not the post mortem.

However, I am planning to return to my Pathfinder Swashbuckling campaign and unlike Mutants & Masterminds where combats are abstract and narrative and I get along with just two books and dice. For Pathfinder I bring along a few more books, and I use maps and miniatures, and I have all the cool goodies I got at Gen Con, Paizo GameMastery cards… Well you get the picture, I need a cart. So as I begin to plan for the eventual return to my campaign I need to do some planning.

We used to play at my house so I had all my books and minis at hand. That setup was ideal, but we can’t play here right now. We have a sweet place at a friend’s house/office, that we call “The Lair”. My Colossal Red Dragon is already there, so I’m pretty sure I could leave some of my minis there. Other groups play there during the week so there are markers and erasable boards, and I think I’ll leave some of the goodies I have there, within reason, the place IS used for something else than gaming!

I’ll be bringing my laptop along, these days I don’t GM without it. It has its own case and I do ALL my note taking there, so that’s covered.  What I need to do is find a tool to transport my books!

I’ve tried all sorts of options. Lugging around two backpacks, leaving books where we play, a trunk with all my D&D 3rd edition books that I pulled in a cart (I kid you not!). So what are my options? I’ve thought about a book bag with wheels, a wheeled computer case, the Bag of Holding Messenger Case (with a great review here!). Ideally it will hold my big core Pathfinder books, some mini cases, my dice, maps…

What do you use? How do you transport your books? Looking forward to your suggestions…

The end is nigh!