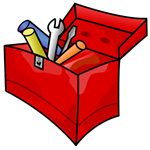 Back in the early days of roleplaying games there were often different roll mechanics for the various aspects of the game. In some games you had to roll with a d20 and get high results to hit but roll low with percentile dice to succeed in your skills. Often one game used various ways to resolve tasks. Each “mini game” had its own mechanics.

Nowadays roleplaying games often have a unified core mechanic. Think of the core mechanic of the d20 System for example:

Whenever you attempt an action that has some chance of failure, you roll a twenty-sided die (d20). To determine if your character succeeds at a task you do this:

While it’s pretty elegant to use the same core mechanic for all of a game’s subsystems, is it really necessary? Or wouldn’t it sometimes more fun to replace the one core mechanic by a whole toolkit full of different mechanics, each designed with a game’s subsystem in mind? What do you guys think about this subject? As always every comment is highly appreciated!