I have been intrigued by Savage Worlds ever since I first read about it. A system designed to be “fast, furious and fun”, without sacrificing the detailed character creation and the tactical aspects I’ve come to like in RPGs, that’s easy for the GM to prep for and can be used for many genres? Sold!

I got the revised rulebook in early 2006 and tried to read it. While it seemed simple enough there were many bits I found confusing, especially how damaged worked (Shaken, not stirred, nor wounded!). So I never got around to finishing it or even playing it. But I kept hearing great things about the game, so when I saw the Explorer’s Edition at Gen Con in 2007 I snatched two copies. I wanted to make this the game for my planned sci-fi game (regular readers will note that the aforementioned sci-fi game has now been in the planning stages for 8 years!) and I figured the extra copy would get passed around the table. Sadly Savage Worlds Explorer’s Edition suffered the same fate as True20 and other previous games I believed would entice my players. It lingered unused in a shelf for years.

Then in 2009 I re-read the Explorer’s Edition, consulting forums and friends online I clarified my biggest doubts and decided to run a one shot post-apocalyptic game using the Savage Worlds rules. I write a two page introduction, printed out templates, the combat survival guide, the player’s mats, the training wheels character sheet (would love to see an updated one for Deluxe) and sat down to create characters with a few of my regular players.

That was my first mistake! Character creation in Savage Worlds is a lot of fun, but is also its own particular beast. When presented with all the options some of my players took FOREVER to create their characters, and some really created subpar characters when they tried to use what they know about character creation from other games on this one. When we finally got to playing we only had a brief RPG encounter and a LONG combat.

I know the Savage Worlds motto (everybody repeat with me!) “Fast, furious, fun”, but I was still too unsure running combats, took it slowly to explain what was going on to the players, and was still stemmed by the damage rules. And here was my second mistake, I made combat too complex. I had too many enemies, with too many tactics and too many fiddly details (shotguns, flame throwers, edges). For an introductory game I needed a simple encounter. And it was deadly! I was aware it could be, but I was not prepared when, with a couple of aces (rolling the highest number on the dice and rerolling), players were just dropping.

Afterward I could identify the mistakes, the game would have run better with pre-generated characters, despite my belief that character creation is integral for learning a system, for a one-shot game this was not necessary. Also I could have broken down combat into shorter pieces, and kept it simpler all around. When we ended the game some players were intrigued, others not so convinced and we all agreed we needed to give this another try.

Fast forward to Gen Con 2011, I had not played Savage Worlds again but my experienced with it convinced me it was a game I could get into. I had purchased various books, both digital and in print, and playing it was high on my list of things to do at the convention. I wanted to play it to get a better grasp on the rules. I got to play in a terrific game run by David Miller, about which I posted about here. It showcased several subsystems, ran smoothly and really illustrated how combat flowed in the game. So I picked up my Savage Worlds Deluxe Edition and other goodies at the Pinnacle booth and was ready to play! 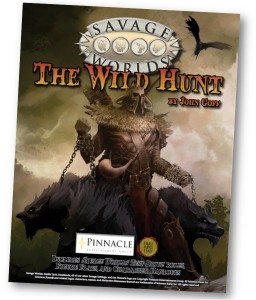 I finally did last Saturday… As part of the 8th Geeknic held by Puerto Rico Role Players (this one titled No Country for Old Gazebos) I decided to run the Free RPG Day adventure The Wild Hunt. It’s a nifty little horror adventure with counters to print for the pre-gens. I grabbed the bus template extra Pinnacle had posted, and some maps I found on the EN World forums. I grabbed my Savage Worlds Deluxe Edition, the official beanies, counters, dice and map and I was ready to go! How did it turn out?

Well, in all sincerity, no as well as I would have liked it. Despite reading the adventure a couple of times I still got lost when I ran it, details were lost in the text and I could have used a highlighter to better identify them. This was my fault. I forgot some rules, the most glaring one being the wild die, despite it being integral to the system, thankfully it was early on and players had only rolled one or two general skill checks. I explained the characters Edges and Hindrances, as well as their background individually and went over major rule details as a group, intending to teach the most complex concepts as we went on.

Then I had some issued with the adventure (don’t worry, there will be no spoilers). As written The Wild Hunt does what it sets off to do well. It’s a classic horror movie out of the 80s or 90s. But it requires some railroading, and with a group of experience players, there were some details I was not willing to gloss over. The introduction had some terrific role-playing and the first act before the horror starts deviated from the adventure as written. Still I thought it was appropriate to the game and was ready for when the real horror began.

When combat started I was surprised by the effectiveness of the player character. They didn’t drop as I feared and instead dispatched the antagonists. I think it was a mix of lucky dice and judicious use of bennies. It took a little longer, but as the players learned the rules along the way it did not bother me. When the hunt that’s part of the title began we only had the chance for some exploration and another encounter and then had to break. It had taken four hours and I was about a quarter into the adventure.

As much as I wanted to finish the game it was not to be, and despite the enthusiasm displayed by the players I think I could have been more engaging to some of them. A combination of trying too hard to learn the rules along as we played might have detracted from my GMing style. One of the many one sheet adventures in the Pinnacle website might have been a better fit for the time-frame.

I could have also printed out some extra help for the players, like the combat survival guide and the player’s mats. But you learn from every experience and this was no exception. Still I was happy to play and became even more convinced that I love this system and I want to run a campaign using it. I have promised one of my players to run a game for him so he can learn the system, and I agree with the general consensus that this is a game that runs better than it reads. So I will put in practice what I learned from this outing for that one-shot.