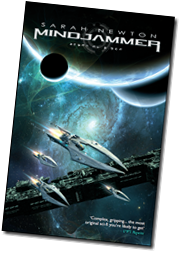 A while ago Sarah Newton contacted me and asked me if I was interested in reviewing her debut novel “Mindjammer”. I have to admit I was hesitant at first, because I usually don’t do novel reviews, but then I agreed because I love her previous work.

Mindjammer is set into the Starblazer Adventures campaign setting of the same name. The humanity has reached the stars millenia ago and the New Commonality of Worlds has united almost all humans. Ultra-advanced technology is commonplace. Intelligent spaceship called Mindjammers roam the stars, humanity is connected by some kind of “thought internet” called the Mindspace.

Sending thoughts to another persons is as easy – even easier – as sending an email today. Thanograms, the sum of the skills, knowledge and memories of a dead person, cast into the Mindscape at the moment of death, can be used as the controlling intelligence of synthetic beings called eidolons, spaceships and even personal equipment. But that doesn’t mean that immortality can be achieved. The belief that an eidolon is actually the dead person is called Transmigration Heresy and is often encountered in colonies that have recently been reintegrated into the Commonality.

The novel starts in medias res on the main planet of the so-called Solenine Cluster, a sector of space that has just recently been rediscovered by the Commonality. In Mindjammer FTL travel is a pretty new technology but mankind has sent out slower-than-light colony ships for ages. The Solenine Cluster is controlled by the Solenine Corporacy which had almost achieved Old Earth’s level of technology when it was rediscovered.

The story focuses on Thaddeus Clay, Jackson Stark, Max Proffitt and Lyra Da Luz, agents of SCI Force, who are investigating rumors of Transmigration Heresy on Solenine. But soon they realize that much more is involved than a few eidolons who believe they are the persons whose memories they carry. In the end the existence of the whole Commonality is in peril.

When I began reading is was more than once pretty much overwhelmed. The Commonality era is very different from our world and a lot of terms used are not explained immediately. I also found that some of the characters are not as detailed as I would have liked. But these are only minor quibbles and after a while you feel right at home in the Commonality era. The action scenes in the book are very well written and are almost cinematic. There was never a dull moment in the book and after a couple of pages I was totally hooked.

What I also enjoyed tremendously was that Mindjammer is a science fiction story that really deserves the name. The technology described sounds plausible and the Commonality era feels “real”. And even though Mindjammer is highly entertaining it also makes the reader ponder a couple of philosophical questions like what makes us human and is there a way to cheat death? In my opinion good SF should not only entertain but make us ask questions. Mindjammer does that all the time.

So who would I recommend Mindjammer to? I would recommend it to everyone who likes science fiction especially if you are into the Transhumanism subgenre. The novel is also a great introduction to the Mindjammer campaign setting. If you plan to run or play a game in this setting, you definitely should read this novel. Mindjammer is a very exiting and intelligently-written novel that should be on the reading list of every SF fan!

Mindjammer is available in print directly from Cubicle 7 or digitally from RPGNow or the Amazon Kindle store. This review was based on the ePub version available on RPGNow and was kindly provided by the author. Thanks again, Sarah!

What about Mindjammer for Traveller? A Review…