Hello readers! Sorry for my prolonged absence. As Michael posted I’ve had my plate full. I’ve mentioned some of it before, but to recapitulate, I’ve been at a new job since late last year, and on top of that I’ve decided to go back to college to do another master’s degree. That in particular has become a terrible time drain. I am thrilled to be studying again, but as part of the accelerated study program I spend most nights working on class work instead of musing about RPGs. I got my priorities all mixed up I know!

I am on a break between classes, a full week, so I thought I’d catch up on my posting for a few days. I’m working in a couple of other things, but I really don’t want to discuss it as not to jinx it. This post came about as a quick fiction piece for my regular gaming night (Tuesdays, for those of you that are wondering!). One of the regular players is out of the country and another one is getting surgery (I wish them both good luck) so we decided to put the supers game in temporary hiatus, four weeks, and play something else instead.

After discussing the options over with the players we settled on a zombie game using Savage Worlds. We also discussed possible settings and the players came to a consensus so I created a Facebook group for the adventure and began posting tidbits of information, some images, and today I posted the accompanying text. This is meant to set the stage for the game. I wanted to get characters ready before the game but real life conspires against us so it’s looking more and more likely we’ll be creating characters tomorrow. Thankfully that process is painless with the system. I’m looking forward to this. I’ll keep you posted about how it turns out. Now without further ado, 2012, the Zombiepocalypse is upon us!

We thank with brief thanksgiving

Whatever gods may be

That no life lives for ever;

That dead men rise up never;

That even the weariest river

The MARS (Miniature Arcology Research Simulacrum) Project was the initiative of The Viduus Conglomerate (Ticker Symbol VID), a publicly traded transportation and communication conglomerate. Founded in Italy, it had its humble beginnings as printing company, but Viduss soon became a global player first in publishing and media and then investing heavily in transportation. The son of the company’s founder and current CEO, Marcello Vidussiari, expressed his desire to collaborate in the drive to reach the planet Mars within the next twenty five years, an initiative spearheaded by various private companies including Virgin Group Limited, Lockheed Martin and IBM, among others. 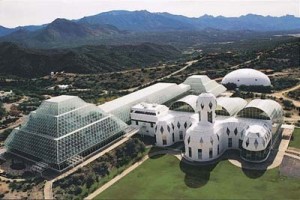 The MARS project followed on the heels of projects such as BIOS-3 and Biosphere 2 and proposed the creation of a contained self-sufficient environment where the feasibility of survival during long term space flight could be explored. Viduss USA, the conglomerate’s branch in the United States, constructed the MARS facility in Mohave County, Arizona, near the small town of Oatman. The structure was based on the design of Biosphere 2 and Oatman residents experienced an economic boom due to the construction, many being hired to work on site after the facility was completed.

The MARS Project was conceived as a three year mission designed to prepare humans for a colonization trip to Mars, and contained a series of ecosystems, research facilities and living quarters with water recycling system, power supplied by a self-sufficient gas generator and no contact with the outside world! Participants were selected to represent a wide range of skills, and since Viduss is also a communications company the MARS Project three acre facility was equipped with cameras to broadcast the experiment to the outside world.

Harshly criticized at first for what one detractor called, “turning a high-minded scientific endeavor into cheap reality TV entertainment”; Viduss addressed critics and explained that the main purpose of sharing the esperiment with the world was to create awareness, motivate innovation and inspire others to join the project to colonize Mars. A website was set up for continuous transmissions from the inside and a series of quarterly TV specials developed. The selection of some controversial entertainment figures as project participants, as well as the fact that those living inside the MARS Project had an economic incentive to remain inside for the duration of the experiment did little to silence its harshest critics.

As per mission protocol, the participants inside the MARS facility had no contact with the outside world. All light inside the facility was artificially created, including in the biomes and the facility was provided with an extensive digital research library participants could consult if they needed to research anything. The mission’s leader, Doctor Martin Hueller, established a protocol as part of the sociological experiments being conducted inside the facility that divided all participants into two categories, Thinkers, composed mostly of technical professions, scientists and what could be described as “white-collar” workers; and Doers, encompassing the participants with more physical labors inside the station’s work schedule, typically considered “blue-collar” workers.

No firearms were allowed inside the MARS Project and in case of emergency there were two options for exiting the facility prematurely. One, if the support and transmission crew living on site, but separate from the participants detected any danger the Technical Services Director could call for an immediate evacuation. Secondly, the participants were given the option to abort the experiment prematurely. To do so one member of each group, one Doer and one Thinker had to come together to enter their individual emergency evacuation code and submit to biometric readings. This process would have to be finalized by a third code/biometric reading combination, that of Mission Leader Dr. Hueller.

The experiment began in October 31st, 2011 when all participants entered the facility at midnight and live transmission began soon after. At first the two sides in the facility were housed in separate areas, but soon where allowed to mingle and relocate inside the housing area, creating interesting interactions. During the first seven months participants showed a mark reduction in, which began to normalize once the first planting was harvested. Some of the projects animals died initially but the remaining were tended and continued to reproduce. The most contentions practice in the house became the weekly diary sessions where participants had to reflect on their experiences so far and record the session. Despite initial reluctance from some members all participants eventually began to fulfill what was since the beginning a contractual duty.

The next six months saw hardships return to the MARS Project, livestock began to dwindle again, vermin, specifically ants and cockroaches became a problem and most beneficial insects died. Some participants reported tiredness, aches and pains and the resident Doctor saw an increase in patient visits. Some strange sounds, heard outside the facility despite the noise dampening, worried the participants but since there has been no evacuation order the experiments and activities inside the arcology continue apace. Despite all this the project continues; the participants prepare to celebrate their second Christmas inside the MARS Project facility. Everything is quiet and calm, perhaps too quiet…

Some of the participants in the MARS Project:

Jonathan Bixby, Technical Services Director for the MARS Project. He and his team are supervising the facility outside and have no contact with the members of the team inside the facility.

Professor Frida Adalheir, PhD in Genetics and the leader of the Botanical Team