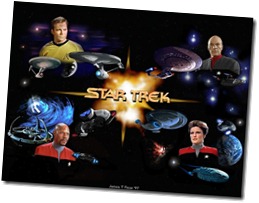 A while ago I have mused about the issues you have with SF campaigns in general and campaigns focusing on space exploration in particular. I have thrown some ideas around and watched several SF movies and episodes from various SF TV series for inspiration.

It was during one episode of the classic Star Trek series when I had an idea. Why not use the premise of the series but get rid of basically everything else. One thing that always kept me from running a Star Trek game was the canon which always felt like a corset instead of inspiration. While I love the premise of a starship and its crew travelling through space, responding to emergencies, dealing with first contact situations and sometimes even fighting enemies, I don’t really want to have to cope with all the “baggage” that comes with it.

Of course I can tell my players that I will ignore some of the canon and stay clear of any metaplot, but then why bother use the Star Trek universe at all? I also like to have a bit more science in my science fiction than Star Trek has. I also prefer my games a bit more grim and gritty. Even though I like to watch Star Trek, I still cringe whenever crew extras are thrown through the bridge set because there are no seat belts.

So what I am currently planning is to get back at writing a SF campaign setting that takes the Star Trek premise BUT is not set into the Star Trek universe. Another SF setting I find highly inspirational is the Mass Effect universe. While I found it a bit hard to run non-military campaigns in that universe, I still love a lot about it.

When it comes to what system to use I am still torn between Stars without Number and MiniSix. SWN would probably provide me with more material to rely on, but also makes some assumptions about the setting. MiniSix is more rules-light than SWN and probably needs me to put some more work into setting-specific stuff.

If I come up with anything concrete (which is not guaranteed) I’ll post it here on the blog. But at the moment I am basically throwing some ideas around and hope for some feedback by my readers.