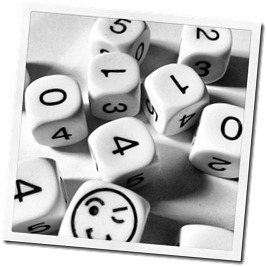 A lot of players shy away from certain games because they use “fancy” dice like Fudge dice, non-standard polyhedral dice, dice with funny symbols instead of regular numbers or something like that.

In a way, I can understand that. Usually roleplaying game players just need a set of the most common polyhedral dice and they can play almost everything. It’s like a basic tool you can use all your life. But then there are these games that need you to buy these fancy dice, or even worse, only one set came with the game itself and you have to share these dice with your GM and the other players! Yuck! Nobody touches my dice!

Roleplaying games that use fancy dice exclusively or even utilize cards for task resolution are usually hard to sell to the average gamer. Or is this just a common misconception? That’s why I am asking my readers today: do you like fancy dice or do you hate them? And why?

I am curious because I have pondered using fancy dice for my own game designs from time to time. I totally love Fudge dice and recently I picked up a set of dice with six-sided dice numbered from 0 to 5 as seen in the image above. Rolling 4 of those and adding the results together generates a number between 0 and 20 in a nice bell curve. My friend Andrew called them z5 (analogous to d6). The results are basically the same as if you rolled 4d6 and subtracted 4, but rolling 4z5 is just easier and nicer.

So, what do you think about fancy dice? Yay or nay? Please post your comments below.