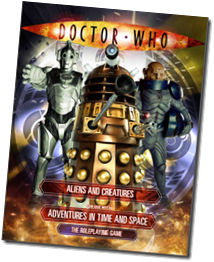 Back in January I wrote a review of the excellent Doctor Who: Adventures in Time and Space roleplaying game. Today I am having a look at the Aliens and Creatures supplement. Like DWAITAS Aliens & Creatures is a boxed set containing not only a 134-paged full-color softcover rulebook containing many of the creatures and aliens featured in the Doctor Who series, but also two complete new adventures, new gadget cards, additional Story Point counters and a whole lot of Creature Cards.

What I like a lot about Cubicle 7’s DWAITAS boxed sets is that they always contain a lot of stuff. And this is especially true for the Aliens and Creatures box.

I totally love the Creature Cards which make about 50% of the box’s weight. Each Creature Card has a photo of the creature on its front and the game statistics on the back. This way the GM can easily show the players’ what they are facing and this can be very handy especially with new players who are not that familiar with the show.

The box contains almost every creature and alien encountered by the 9th and 10th incarnation of the Doctor and all of them are described in detail in the rulebook. It’s nice that they managed to include that many creatures in the box, but in several cases I fear that the actual usability is quite limited. But since we are dealing with Doctor Who and time travel, everything is possible. There’s a special emphasis on the Daleks and the Cybermen, but this is hardly surprising, because they can be considered as the Doctor’s most (in)famous enemies.

The rulebook also contains some rules that should help any GM to create their own creatures. Although rules is probably the wrong terms, they are more tips and loose guidelines than hard rules. This chapter of the book also contains rules on how to create alien player characters. The included race packages are Hath, Catkind, Human Dalek, Judoon, Forest of Cheem, Malmooth, Ood, Tritovore, Plasmavore, Sontaran and Werewolf. Using the guidelines described in the book the GM can easily come up with alien races of his own design.

The appendix of the rulebook contains the “New Worlds Generator” which consists of a couple tables that allow the GM to randomly generate new worlds for their campaign. The generator is of course not as detailed as the one from Traveller or GURPS Space but should be more than sufficient for a Doctor Who game. Last but not least three example worlds including appropriate adventure hooks are given at the end of the rulebook.

The adventure book contains two new ready-to-play adventures and a couple of new adventure hooks. Together with the adventures from the “core” boxed set you should easily have enough adventures to entertain your players for quite some while.

In my opinion the Aliens and Creatures boxed set is a “must-have” for everyone who already owns the core boxed set, because a) you can never have enough monsters and b) especially the included Creature Cards are extremely useful.

Aside from the boxed set, which is available directly from the Cubicle 7 store as box+PDF bundle for $39.99, you can get the PDF-only version from DriveThruRPG for $24.99. This review was based on the boxed set which has been kindly provided by the publisher.

What about Advanced Feats: The Summoner’s Circle? A review…