Back in 2001 a small company called Privateer Press released “The Witchfire Trilogy Book 1: The Longest Night” for D&D 3rd Edition. Today Privateer Press is probably best known for its tabletop miniature game lines. For quite some time fans of the original d20-based Iron Kingdoms roleplaying campaign setting have been waiting for a new roleplaying game by Privateer Press and at this year’s GenCon the new Iron Kingdoms roleplaying game made its debut. I had the chance to ask Jason Soles, who was Lead Designer for both WARMACHINE and this new game, a couple of questions about their new RPG.

Stargazer: Hi Jason. Thanks again for answering a couple of questions for us. It has become a tradition here at Stargazer’s World that I ask a few questions about how you got into gaming first. So please tell us a bit about yourself and how you got into the hobby. What was the first RPG you ever played?

Jason: Hello. I started as a kid playing whatever roleplaying game I could get my hands on. After years of playing eventually I started writing games, first in my spare time and later professionally. I’ve now spent over ten years with Privateer and I’ve never looked back.

Stargazer: From what I’ve seen the rules of WARMACHINE and the roleplaying game are more or less compatible. Was that the plan from the beginning or did you consider using a different system first? What was the hardest part of turning a miniatures game into a roleplaying game?

Jason: We knew from the outset that the new game would be based on the mechanics of WARMACHINE and HORDES. During our first experiences trying to translate the Iron Kingdoms into a roleplaying game, we realized that to truly bring the world to life we could not limit ourselves to playing in someone else’s sandbox. Not only have the rules for our wargames been meticulously honed, but they also represent a natural extension of that world so it just made sense to use them as the basis for the RPG.

Stargazer: I have to admit my favorite aspect of the new IK RPG are the careers you pick during character creation. Can you tell us a bit how you came up with the idea? Will there be new careers to choose from in the future?

Jason: Strong characters stand tall the Iron Kingdoms, which is really a lens to tell their stories. To create the depth we were looking for in the RPG characters we knew we needed a career-driven system that would enable characters in the game to grow and transform over time, to realize their stories. However, our initial career offerings and mechanisms for advancement left us a little unsatisfied. That’s when we struck on the idea of starting players off with two careers so player characters could jump into the world as Gun Mage–Warcasters and Pirate-Duelists, the sort of characters that populate the Iron Kingdoms.

And yes, there certainly will be more careers in the future.

Stargazer: One of the criticisms I read on the ‘net about the new Iron Kingdoms RPG is that the magic system is lacking non-combat spells. From what I’ve seen quite a few spells could be useful in non-combat situations as well, but the focus is still on combat magic. Are there plans to expand the magic system in the future?

Jason: We will be adding new spells, traditions, and arcane abilities in the future as we explore warlocks, infernalists, necromancers, and the like, and the various blood magic of the setting will touch on divination. However, I would not expect to see a wide range of utility spells added to the game.

Magic in the IK has its limits. Its forms are highly formulaic. Magic has its own physics and applications. As a general rule people don’t use magic to accomplish a task that can be performed without it. (Take that statement with a massive grain of salt, though; read it too literally and there is no room for magic in the world.) If you want to speak another language, hit the books. If you want to broadcast a thought over land, go to a telegraph office. For that matter, spell casting is just one form magic takes in the IK. Alchemy and mechanika are both incredibly powerful disciplines that have many potent applications. While spells may occasionally mimic the effects of mechanika (or alchemy) and vice versa, they also have their unique uses. For example, the cortex is an incredible piece of magical hardware. It may be one of the greatest expressions of arcane formulae yet devised and has no equivalent with regards to spell casting.

Jason: We are planning a Monsternomicon as the third book in the series. However, it will be expanded with lots of character options, such as the rules for warlocks, warbeasts, and monster hunters in the RPG. We have no plans to re-release or update the Witchfire Trilogy, though we will be writing entirely new campaigns for the RPG. Truth be told, updating the Witchfire wouldn’t really be much easier than coming up with a whole new campaign that our players haven’t already experienced. 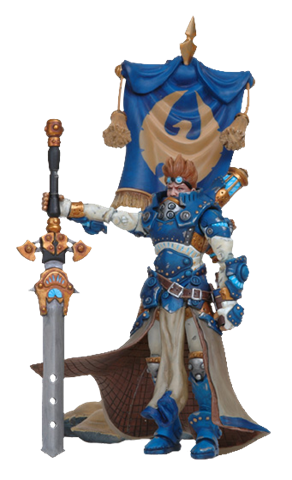 Jason: It seems likely that players and Game Masters willing to make the effort could create close approximations of characters from the wargames, but to be honest, I have no idea how well it would work. I have not tried to convert characters myself, and the RPG intentionally moved away from being a model of the wargames. In order to balance some character types (read as “warcasters and warlocks”) we had to place limits on character development in the RPG to give everyone a chance to shine. We needed to make sure that there was room for a broad range of character types and no one stole the show. The same limits are not necessary in WARMACHINE and HORDES, in which the warcasters and their battlegroups are the show.

Stargazer: Can you tell us a bit about the future of the Iron Kingdoms roleplaying game? What is the next scheduled release? It would be great if you could also share a few long-term plans with us.

Jason: We have four books planned for the RPG line. The next book focuses on the Iron Kingdoms of Cygnar, Khador, Llael, Ord, and the Protectorate of Menoth. The book will plumb the histories, societies, and people of these kingdoms in at least much depth as the old World Guide. Additionally, it will be chock-full of playable content, including new careers, hardware, and steamjacks. The third book will be the Monsternomicon. The fourth will focus on the ancient empires of Ios, Rhul, Cryx, and the Skorne Empire. Additionally, we will also be regularly adding content to the pages of No Quarter magazine and have campaigns and other offerings planned.

Stargazer: Is there anything you wish to add before we conclude the interview?

Jason: I just wanted to say that we have an incredibly talented team working to bring the Iron Kingdoms Full Metal Fantasy Roleplaying Game to life, and it is a pleasure to talk about the game. This really has been a labor of love in which everyone has risen to the occasion, so I hope our players get the same enjoyment out of it as we had bringing it to you.

Stargazer: Thanks again for answering these questions for us. It has been an honor for having you on Stargazer’s World. The team and I wish you all the best for the new Iron Kingdoms RPG and all your future projects!

Jason: Thanks very much! Now I’m headed back to the trenches.