Seems like we are on a sci-fi roll here in the blog in 2013! So keeping with the theme, I’ve decided to share with Stargazer’s World readers a sci-fi hack I’ve been working on for the last couple of weeks. 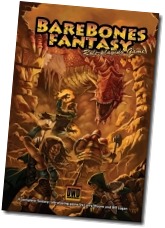 Ever since I read the BareBones Fantasy rules (which Michael reviewed here, and posted about here), I’ve been itching to use the rules for a sci-fi game. It’s no surprise, the creators of the game DwD Studios are longtime supporters of my favorite old school sci-fi game Star Frontiers, about which I have posted here. They are in fact working on the FrontierSpace game, and some of the work done for that game apparently was carried over to BareBones Fantasy.

So I got about trying to modify the rules for a sci-fi game. This is NOT an attempt at a super detailed science fiction game, but more of a general rule set for the genre. It will require some simplification and assumption of genre tropes. I tried to keep the spirit of the BareBones Fantasy rules and REALLY tried to keep it simple. I don’t know if I’m going in the right direction, so that’s why I’m writing this post. I would love to get some feedback on the rules so far, criticism, see what you think work or doesn’t work.

Mind you this is a work in progress. Not all areas are complete, and I intend to revisit, but I encourage you to pick it apart and leave your feedback in the comments. Page references are to the BareBones Fantasy rule-book  and notes in italics are design decisions I am unsure about. Thanks to Michael, aka Stargazer, for his input as I was conceptualizing this! OK let’s get to what you are here for…

Remains the same as in pages 5 to 7, except for the changes regarding new skills and changing coins or gold pieces to credits. I’ll probably keep the Moral Code rules, if slightly tweaked.

Adapt existing races or create new ones, I haven’t gotten around to this yet… The first ones I plan to convert are the Star Frontiers races since this little hack will more than likely allow me to run a Google+ Hangout Star Frontiers game!

This is the part of the rules I have altered the most. I have simply renames some skills, shifted around what some could do, and created brand new ones. I think this is the core of the system and the one I want to double check. What do you think of the more extensive use for different abilities for different applications of the skills? Are the new abilities too complex?

This skill represents training in the art and abilities of an investigator, spy or someone navigating the shadier underworld of galactic society.

Commander (alternate title Diplomat, what do you think?)

Experience and training in the role of leader, both in and out of combat.

Score: half WIL +10 per commander level

This skill determines the level of training on the piloting of vehicles of all sizes and the control, and repair, of all related systems.

This skill represents the innate ability to use psionic abilities and training on the use of these abilities.

Score: half WIL +10 per psionic level.

This skill represents a general knowledge on various scientific fields and disciplines  and specific knowledge in some areas, including medical training.

This skill represents training or experience as an outdoors-man, survivor or colonist.

This skill represents training or experience as a mercenary, infantry, space marine, etc.

Special training in technology related fields beyond the common everyday use of technology of a space age society.

Spells are renames Psionic Disciplines.  These disciplines are nto affected by lead, but the system may have psionic dampers or fields. All references to spellcaster is replaced with psionic, but otherwise discipline work  identically as the spells with the following exceptions:

Commune – (From Decahedron Magazine #1) no communication with thee dead is possible.

Repel – this discipline affects any enemies, not specific creatures, and represents a telekinetic push. Enemies cannot be destroyed, instead they are incapacitated if they fail a WIL resistance roll.

Transport – there is no teleportation, at level 5 the character gains a burst of speed that allows him or her to move anywhere in combat or its periphery.

I need to work on sci-fi equipment, including power armor… Also there is the need to rework some magic items as high tech equipment. For example

Vehicles are categorized in a three step scale:

Size 3 (Capital Ships) – the largest ships in a space armada

Perhaps include some penalties on bonuses bases on size; perhaps make a little table…

Vehicles are defined by the following statistics:

Naval positions in a bridge (depending on the ship) to interact with the pilot skill – Pilot/Helm (includes maneuvering and resistance checks), Communications, Weapon Systems (attack and damaged), Engineering (repairs), Captain (bonus to initiative).

Chases – Initiate a chase from combat is a contested maneuvering roll. One is the pursuer the other the target and chases are a series of contested actions.  Each side that wins a contested check gains an advantage. Critical success grants two advantages, critical failures eliminate an advantage. Whoever gets five advantages first succeeds. The pursuer catches its prey, the target escapes.

OK this is what I got so far. I’ll revisit this in a future post, hopefully integrating your feedback. Thanks for reading!