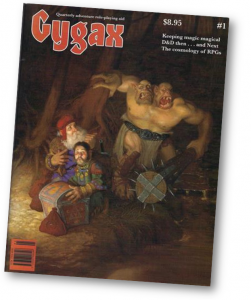 When Gygax Magazine was announced I was thrilled. Although I am not a big super of the OSR movement (more on this later!), I understand its appeal and there are instances where I enjoy it. Also if you’ve read my past reviews of Kobold Quarterly you’ll know I’m a fan. I always compared it to the old print Dragon Magazine. It was to me the spiritual inheritor of said publication. So what about this magazine that was clearly setting itself up to be the direct descendant of Dragon, from font, to art to content? Would it work?

When the release came out I was REALLY disappointed… I wanted to participate of the fun and get the magazine, but alas there was no electronic version when it came out. That, to me, was a head scratcher; in this day and age to ONLY go with print at launch was a miss. I understand the nostalgia, which was confirmed upon reading the editorial, but that was not communicated effectively beforehand.

In their defense they cleared up questions really quickly, communicated effectively and assured us there would be a digital copy soon. And there was, but no having the digital copy right there and there took the wind off my sails a little bit. Despite the excitement in the RPG community I was a little disappointed by everything I saw about the magazine. It looked TOO MUCH like Dragon magazine; I feared it might not be a tribute and become merely an aping of glories past.

The table of content did NOT help… I saw a lot of articles that really did not interest me, some of the retrospectives and columns seemed better suited for a blog post than a magazine article. The digital age has really changed how I deal with content and when I pay for content I want more concrete gaming material I can use. The more anecdotal, promotional or simply informative content seem best served by another medium, such as a blog. And I feared that the table of content pointed to that being the case.

Still, when the magazine was released in digital form, and for a very reasonable price, $4.99 (when compared to $8.95 for print), I took the risk. I was NOT disappointed. The magazine is 64 pages of nostalgia and good content. True it looks like Dragon Magazine from the start. From layout to font, this was a trip down memory lane. You’ll notice I said good but not great. This is not meant disparagingly. This is a solid magazine, but there is room to improvement.

There was still a MANY of retrospection and reminiscing columns. All well and good, but I would not enjoy this every quarter. You won’t be surprised when I say that my favorite part was The Kobold’s Warren, the section of the magazine where a little bit of Kobold Quarterly lives on. However I was surprised by how much I enjoyed the Cosmology of role-playing games article. It captured the feel of the old Dragon, and was actually a lot of fun. Another standout for me was Leomund’s Secure Shelter, part retrospective, part content, all over the place, but so much fun!

The article on DMing for Toddlers was great, and brings home the point we are now a generation of adults teaching the younger generation about gaming. The art was generally top notch, the cartoons great, a while I felt there were a LOT of adds in those 64 pages, I understand the need to finance the product, perhaps a couple of extra pages, or some electronic content to compliment the print/electronic product would be good. 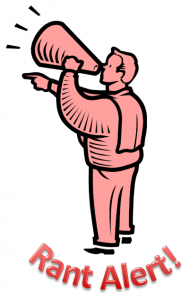 I understand the appeal of OSR, the nostalgia, but… I played those games. They were fun, and I enjoyed them at the time, but like with many things from my youth, they are better under the veil of memory. I loved Robotech as a kid. I went back and watched it, did not love it so much. So on and so forth with MANY of the cherished things of my youth. They are better served by being remembered not relived.

Many OSR games are like this to me. There are newer designs, with modern mechanics, that better fit my gaming style. I go back and read some (not all) OSR games and say, “Why would I like to play this?” There are modern games that are simple, without the warts I did not notice as a teen.

There are exceptions, I love Stars Without Number, because it does wonderfully creative things with the old school rule set, and adds so much in the way in handles sandbox games. It builds upon the past and pushed to the future. I get the nostalgia if you never played these games. I did back them, there is a reason I no longer play them!

Forgive me if it sounds harsh, this is just MY take on it. Ironic for a guy who is planning a one shot using the BECMI rules in the Rule Cyclopedia. To me OSR is good for an occasional game; I just don’t see myself running a long term campaign with such rules. YMMV!

Thus I would love to see the content of future Gygax Magazine continue the mix in the first issue and avoid being just an OSR vehicle.

Oh and I love the histories and reminiscing, but I would keep it to a minimum, if it goes out of control the magazine could become repetitive. There is space for exploring the history of the game, but I buy magazine like this for the gaming content, be it crunch or fluff.

I found myself enjoying Gygax Magazine so much more than I expect it. I’ve read almost all of it by now, something I don’t typically do with ANY magazine, so I can heartily recommend it. So go and get it, whether in digital or print, I’m sure you’ll enjoy it!

Preparing for Gen Con: Almost There!