Recently I stumbled upon a Kickstarter project I just had to back! Breachworld is a post-apocalypse kitchen-sink setting using the MiniSix rules. These are already three reasons why this sounds very exciting to me. 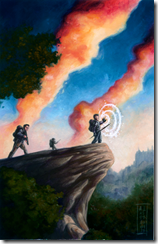 Even though the author Jason Richards (who has worked for Palladium Books before) has stated somewhere (I can’t find the source at the moment) that the game shouldn’t be confused with RIFTS, I definitely get the RIFTS vibe from Breachworld. There are rifts breaches to other worlds through which magic, monsters and all kinds of weird stuff comes into our world.

The artwork and layout mock-ups I’ve seen so far look pretty awesome, the setting reminds me a lot of RIFTS (which is a good thing) and I love the MiniSix rules. At the moment of this writing $4201 have been pledged of the $7500 goal. There are still 26 more days to go, so if you are into weird kitchen-sink setting and rules-lite systems you should check this Kickstarter out.