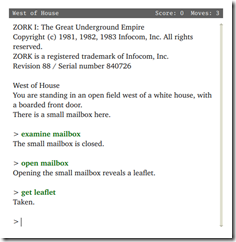 Some of you might remember the computer stone age, when the majority of computer games were text-based. Interestingly enough the games from these days are still pretty popular today. Perhaps not in the mainstream but there are still gamers who enjoy playing roguelikes or text adventures (aka interactive fiction).

When I was a kid I loved adventure games. I actually even tried to program them myself. My first attempts were quite terrible, but it was fun forcing the computer to do one’s bidding.

Recently I have been thinking about things I loved to do in the past and which I don’t do anymore. Writing software is one of those things. I never was a good programmer, but I still enjoyed coding small programs. I also wrote a lot of short stories when I was a kid, mostly using my grandpa’s typewriter. Ah, those were the days!

While I was basking in nostalgia I thought it could be a lot of fun to write my own adventure game. And in a way, these text-based games are not that far off from the role-playing games I play. Doing some research on the internet I eventually stumbled upon Inform 7.

Inform 7 is a software that allows you to write interactive fiction games using (almost) normal English language. You don’t have to learn a complex programming language, but designing your game comes almost as naturally as writing a story.

Here’s an example from the Inform 7 documentation:

The Cobble Crawl is a room. “You are crawling over cobbles in a low passage. There is a dim light at the east end of the passage.”

The Debris Room is west of the Crawl. “You are in a debris room filled with stuff washed in from the surface. A low wide passage with cobbles becomes plugged with mud and debris here, but an awkward canyon leads upward and west. A note on the wall says, ‘Magic word XYZZY’.”

The black rod is here. “A three foot black rod with a rusty star on one end lies nearby.”

Above the Debris Room is the Sloping E/W Canyon. West of the Canyon is the Orange River Chamber.

See, how easy it is? Of course you can’t just write down everything that comes to mind. You still have to follow certain rules, but it’s way easier than to write an adventure game from scratch using conventional programming languages.

So, if you are interested in creating your own interactive fiction, why not check out Inform 7. It’s pretty impressive and free to boot. And if you come up with a cool game of your own, please let me know.