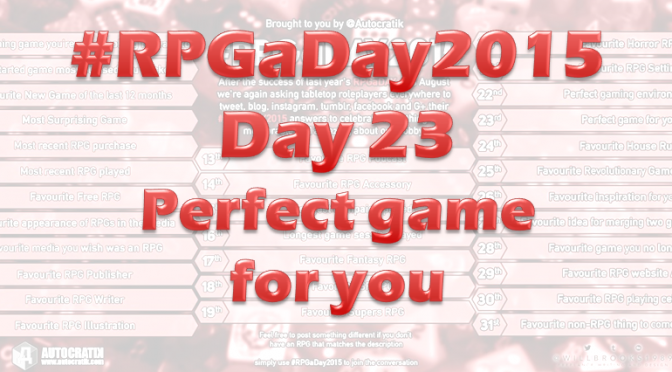 Another Sunday #RPGaDay2015 challenge entry, Day 23! Today’s topic is one of those over which edition wars are fought in the trenches of internet message boards, perfect game! Thankfully David Chapman (The creator of the challenge and whom I haven’t linked to back enough! Thank you for this idea.) added the caveat, for you. So here we go…

There may be those who argue that for the characteristics I’m about to list there is already a system out there that covers them, and I’ve tried many, but haven’t found one that meets all the requirements to my satisfaction. Let’s make a list of the characteristics of the perfect gaming system for me:

Those are the main points I can think of. You could argue that there are systems that do this, Savage Worlds, True20, Mutants & Masterminds, GURPS, even the Cypher System, but having played most of them, none meets all the requirements I’ve outlined above. And that’s a tall order to fill, I know, but as long as were are going with my wish list for a perfect system, I can dream can’t I?

Let us know what’s the perfect game for you in the comments. See you all tomorrow, hope you had a great weekend!