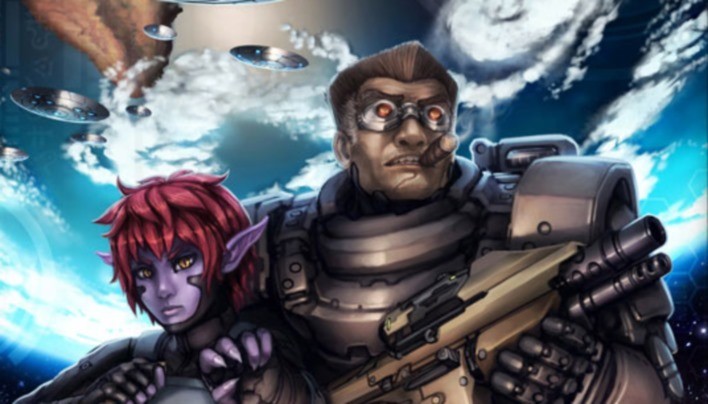 Do you like computer games like XCOM – Enemy Unknown? Do you like roleplaying games with deep tactical combat, base building, high tech, and an alien invasion? You don’t mind crunchy rules? If you answered most of these questions with YES, you definitely should check out Clockwork Publishing’s latest Kickstarter project.

The German roleplaying games publisher Clockwork Publishing (aka Uhrwerk Verlag) is currently trying to raise money for an English edition of CONTACT, its “tactical alien defense” RPG. I actually picked up a copy of the German edition as soon as it came out a couple of years ago, and had a great chat with its author Robert Hamberger. In a nutshell, CONTACT is pretty much the XCOM series in roleplaying game form complete with base building. In my humble opinion it is the best adaption of the series I have seen so far, even though it doesn’t use the license. 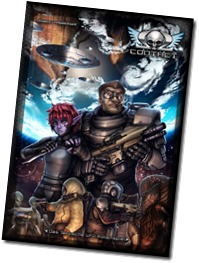 Rules-wise it reminds me of games like Basic Roleplaying because it uses a similar percentile dice mechanic. But compared to BRP the combat rules are much more detailed. The game even uses action points like in the original XCOM games. I have to admit that rules-wise CONTACT is a bit too crunchy for my tastes, but you know that I prefer way lighter fare. But people who have played the game told me that you can easily reduce the complexity if needed. But if you are not afraid of crunch, you might find a lot to love in CONTACT.

The game is set into a near-future version of our world where the secret OMEGA organization is fighting against an alien invasion. Of course the OMEGA agents have access to the highest technology available to mankind at the moment. What really makes the game shine is it impressive artwork. Even if you don’t like the art style you just have to admit that this game has awesome production values.

If you want to have a free first look at what CONTACT has to offer, check out the quickstart rules available here.

The Kickstarter started today and is set to end on December 3rd. Clockwork Publishing has set the goal at €12,500 which should be enough to pay for the printing of the core rulebook. There are stretch goals which will update the core rulebook to hardcover or add additional material for the backers.

With a pledge of just €25 you get a copy of the PDF version of the rules if the projects gets funded. Starting with €40 you’ll get a full-color printed copy of the rules. And trust me, the book is gorgeous! As far as I know the rules are already fully translated, so backers should get their PDFs directly after the KS got funded.

If this sounds interesting to you, why not check out the KS project page now?

Dying Earth is back with a vengeance!