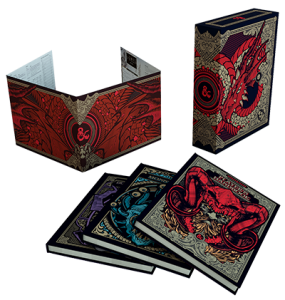 I have mixed feelings about the D&D Core Rules Gift Set announced by Wizards of the Coast. True, a gift set with the core books and a screen could be useful for a new player, and if this bundle was offered upon the release of D&D 5th edition I would have certainly brought it, but the price for the three books and the GM screen is the same as buying them individually, plus $5 for the cardboard box! The special covers are a nice touch, and since they are only available via retailers, it drives business to FLGS which can certainly use the exposure and traffic. If your books are work out and could use a refresh, one of the angles they take on the product page, it would certainly be worth checking out the special covers. 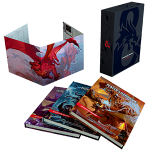 Yet I feel it is too soon to replace my books. Mine are in a backpack in my car, have certainly seen plenty of use, but they are fine. I also spent money on buying this content in D&D Beyond. Content I preferred to pay for legally rather than download the pirated PDFs. And true, there is greater functionality when the content is used with all the features on the platform, but my point is I’ve already paid for this content twice.

If I don’t want to buy them I don’t have to. There is nothing wrong with a completist collector wanting to get the special edition covers, but here we start getting to what bothers me about this move… Let me backtrack and give some content.

Along with RPGs, collecting comics was my hobby for a long time. These days I mostly read them via Comixology and the occasional TPB, but I’ve stopped collecting comics. But I was there for the heydays of the 90s. I worked at a local comic book store, which also carried role-playing games, I indulged in both my hobbies at the same time. I worked there during the onslaught comic books with special collectible hologram or foil covers, and saw the boom in sales, and the resulting bust when speculators stopped seeing comics as an investment and walked away. This move by WotC reminds me of those times.

I feel like they are marketing this to D&D completist who just MUST have all the D&D books available. Undoubtedly some people will look at this and think, I might just get these books and hold on to them, they might be worth something in the future. This move concerns me. Undoubtedly collecting has been part of our hobby for a long time but inviting speculators and producing limited runs of special-must-have-covers just plays to that crowd and in the long run it hurt the comic book hobby.

WotC wants to make money. Hobby shops can certainly use the business. Who am I to rain in their parade? All well and good… I just feel that WotC is investing time and effort in these gimmicks, instead of investing it in new content for D&D, in expanding the game. This doesn’t seem to have impacted their schedule, and I loathe that you may think of me as the grognard bemoaning that the sky is falling, because I’m not. I’m jut pointing out that this has happened before and warning of the possible dangers it may bring with it.

A recent column in the Daily Illuminator by Steve Jackson Games about building a stronger company in the face of a market flooded with new content constantly; and the rate at which we get new versions of relatively recent games, has me wondering if the hobby may be headed towards a contraction. The Steve Jackson Games column may speak more about their company not the business of tabletop games in general. I certainly hope my hobby continues to grow and thrive but moves such as these certainly worry me. I really hope I am wrong.

What do you think? Let me know in the comments below.