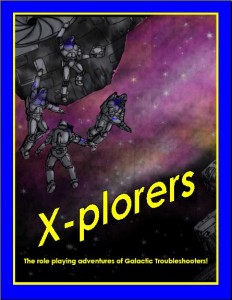 David Bezio just informed me in the comments to my last X-plorers post that the final version is available now on Lulu for download as a PDF or for order as paperback book. He also has created a website for his company Grey Area Games.

X-plorers is a thought experiment. What if the fathers of roleplaying were science ficition fans and created a SF RPG in 1974? X-Plorers feels much like a game created in the golden age of roleplaying. From the official site:

In the year 2,222 AD Earth, Venus, and Mars are united under one government, the United Corporate Nations (UCN). The UCN is a political engine composed of representatives of thousands of powerful corporations. Far beyond our solar system lies the “Reaches”, a densely packed cluster of stars, many with habitable worlds very similar to Earth. The UCN is looking for both habitable planets and those ripe for resource exploitation. Such a vast and new galaxy breeds nothing but trouble. Who better to handle such trouble but the galactic troubleshooters…X-plorers X-plorers is a “what if?” role playing game. In this case, what if the fathers of the role playing hobby were more into science fiction than fantasy when they wrote that first set of official rules back in 1974? What if that game was about humans expanding and exploring their universe, instead of delving into deep dungeons to kill monsters to earn treasure? These are the questions X-plorers attempts to answer.

I have to admit that I was a bit surprised that the final version of X-Plorers was not available for free as PDF. I somehow expected it to follow the business model of most retro-clone RPGs that offer the PDF for free and sell the printed version.

The PDF version of X-plorers sets you back €4.65 and a printed paperback version is available for just €9.30. If you are a fan of old-school gaming and SF, you should have a look at X-plorers. You can discuss the game and upcoming Grey Area Games products at the official forums or the X-plorers Yahoo Group.

UPDATE: The free version of X-plorers is now available from the Grey Area Games website!

Ask The Readers: Can games built around a huge twist work?

The Misogyny At The Core Of Our Hobby