I hope some self-advertisement is in order, because today I want you to tell you about my brand new  and shiny blog Stargazer’s Tech Blog. Ok, the name is not very creative but you probably know already what it’s about. Some of you probably already know that I am not only an avid roleplayer but also a total tech geek. I love all kinds of electronic gadgets, I always browse the internet to find the newest and coolest software and I just have to try out every new web service. 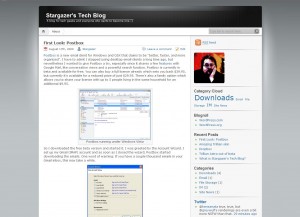 A first look at my new blog

But alas Stargazer’s World is not the right place to write about those things, so I just created a new blog. Instead of hosting it myself I decided to use WordPress.com. That has several reasons: a) I just don’t know how the blog will turn out and b) I wanted to try out the latest features there. But don’t fear, my friends, my focus is still on Stargazer’s World, I just need a place to write about some of my other interests.