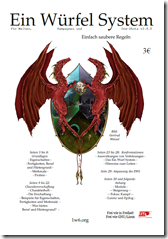 Recently Rob Lang of the Free RPG Blog asked me if I knew “1w6 – Ein Würfel System” (1d6 – One Die System). I had to admit that I’ve heard of it before, but I haven’t actually read it. So today I have a look at this free RPG which isn’t available in English language yet.

Free as free software
1w6 has been released under two licenses. Everything available at the website (including the rules you can download in PDF format) are licensed under a Creative Commons Attribution-Share-Alike-Non-Commercial license. But the creators of the game also offer a printed version which can be ordered directly from them or bought at some FLGS. This version has been released under the GNU General Public License.

Rules basics
A character in the EWS (Ein Würfel System) is described by traits and skills chosen freely by the player. Alternatively the GM may decide to use the attributes and skills from other games like GURPS or Fudge instead. Both traits and skills in normal humans are rated from 6 to 18. Action checks are made by rolling 1d6 and adding an appropriate trait or skill. If an even result is rolled it’s considered positive, odd results are negative. This method is called ±D6.
Usually the target number necessary to succeed is 9 or more.

Compatibility
The EWS was created with compatibility to two other games in mind: GURPS and Fudge. You get much more out of EWS if you have access to either one of these games. There’s even a sidebar containing detailed information on how you can convert advantages and disadvantages from these games to the EWS.

Presentation
I had a look at the German PDF version of the EWS, which is 52 pages long and contains character artwork from the computer game “Battle of Wesnoth” (which is also available under the GPL). The layout is one-columned with sidebars which contain additional information like designer’s notes and the like. There are a few editing errors, but nothing major. The production values are very decent for a free product.

Worlds and  Modules
The 1w6 website offers a SF setting for use with the system called RaumZeit (SpaceTime) and links to a few other websites which detail campaign worlds that are played using the EWS. Basically a GM should be able to play in every genre. There are also optional rules in form of modules available at the site which add magic, an initiative system, critical successes and failures and more to the game. “Modules” refers to the modular nature of the system which allows GMs to mix and match the rules to suit their preferences.

Conclusion
The EWS is definitely an interesting game, especially when you need a rules-light game with some compatibility to content created for Fudge or GURPS. Alas the rules are not available in English at this moment and the core rules don’t contain any rules for supernatural abilities like magic or super powers. But a resoruceful GM with a good grasp of the German language might put the EWS to good use.