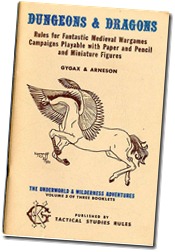 From what I’ve heard the majority of gamers started playing with a variation of D&D, may it be the original D&D from 1974, AD&D 2nd Edition or the more recent D&D 3rd Edition (or any other edition). A lot of German roleplayers were introduced to the roleplaying hobby by “Das Schwarze Auge” (known as “The Dark Eye” in the US).

As I already described in my “Confessions of a Gamer: In the Beginning“ post, I started with TORG. Actually I played the game only once on a small gaming convention near Bonn and didn’t even understand half of the rules, but I was instantly hit by the RPG bug. Later I joined a Warhammer Fantasy Roleplay game. To this day, Warhammer Fantasy Roleplay is one of my favorite games and obviously one of the games that influenced me most. So you could consider WHFRP 1st Edition my true first game.

So, what was your first game? Please share a few of your earliest roleplaying experiences with us. If you are a RPG blogger yourself, why not write a post about this subject on your blog? A trackback to this post would be appreciated though.

P.S.: Thanks to Roberto Micheri, who inspired me to write this post!

Driveby Nerfing! The recent Wizards of the Coast update to D&D 4th edition…