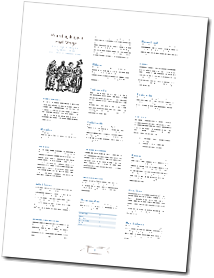 As you probably already know, “Warrior, Rogue & Mage” is a rules-light fantasy RPG created by me. The whole design process was under 24 hours, so I didn’t really bother with finding a proper name.

I am thinking about working on a revised edition which contains new player option, additional equipment and more background information on the Imperium of Vaneria. I also plan to fix some errors I noticed and add in the houserules Will mentioned in his playtest report.

But I am not really happy with the name of the game right now. WR&M doesn’t really roll of the tongue that easily and it sounds pretty boring. Since I always have trouble coming up with cool sounding names, I decided to ask my readers for help. What would you call this fine game? And while we are at it, what would you add to make it a more interesting game? Please share your thoughts in the comments below!