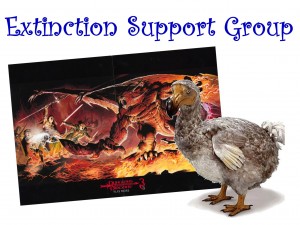 I always tell myself I’m not going to buy it. But I always do and I’m consistently underwhelmed or outright disappointed!

There was a time when I had a use for Game Master Screens. They offered cardboard-based defense technology from the prying eyes of my players as well as tactical displays of essential information. When I played AD&D and AD&D 2nd edition the DM Screen was a boon. It had all the necessary tables and I could pretty much run the game without opening a book unless I was referencing a spell. One of my players even prepared a special extra large DM screen he put together containing all the 2nd edition rules and tables I could EVER use, constructed with cardboard and tape.

As time went by I discovered the joys of game mastering without a screen, more direct contact with my players, easier to play in different configurations, no longer was I bound to one corner of the table, I could move around the room, act out NPCs while walking to and fro.

Back when I was playing D&D 3.5 we had a big group and a sweet gaming set up with a large table so I hesitantly went back to the screen. The four panel D&D 3.5 landscape screen was probably the last one I was actually impressed with, it came bundled with issue #310 of Dragon magazine, and I personalized it by attaching laminated maps to the outside (player’s side) and campaign specific notes to the inside (DM’s side).

These days I run most of my games from my laptop. I have the books for reference, but I use a combination of the Pathfinder RPG PDFs, the SRD and my notes (in Word and Excel mostly) and rarely open the books. 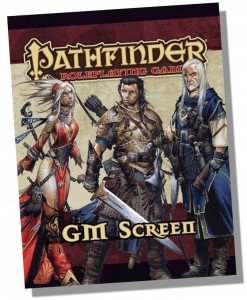 Today I went to the Paizo website to buy the electronic version of the Pathfinder Game Mastery Guide (more on this one another post) and on impulse brought the Pathfinder GM’s Screen PDF. I figured that I could either use it on the customizable screens I purchased, like this one for Savage Worlds (I own both a regular and a landscape version), or print it out as a reference for me and my players.

I cannot say I was disappointed by my purchase. The information in the screen is well laid out, and useful, but nothing I could not have put together myself. The player’s side was just art, pretty art at that, but nothing useful since I don’t plan on using the screen in a traditional way. I guess you could say I paid $4.99 to not pass the trouble of compiling this information myself. Not a bad deal, but nothing to write home about.

This brought about my pondering… Do I really need a Game Master Screen? I think that for me, the answer is no, not the way I run my games anyway. Your experience may be different. What do you think?

What about SORD? A (short) review…

12 thoughts on “Does the GM Screen deserve to go the way of the Dodo?”