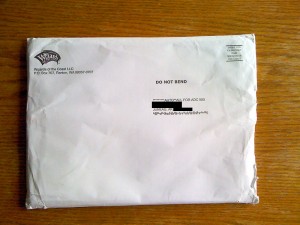 I got something very unexpected in the mail last Friday when I went to check my PO box. Wizards of the Coast sent me my second DM Rewards package of the year.  I was standing in the post office holding a large white envelope from Wizards of the Coast that had DO NOT BEND printed in large bold letters across the front.

“Cool” I thought, “I completely forgot I was apart of DM Rewards program.

When I got home I couldn’t wait long to open the envelope from Wizards. I cleared off a space on my dinning room table and opening the envelope and pulled out all of it’s contents.

The first thing on top was a Welcome to DM Rewards letter that reads:

Contained within this envelope is your reward adventure entitled Tomb of Horrors, and update of the classic 1st Edition adventure for the 4th Edition game! You’re Receiving this reward for simply signing up and being a current active member of our DM Rewards program. Consider it a “thank you” from Wizards of the Coast for the time you take to offer your players the enjoyment of a Dungeons & Dragons game!

Each year you’ll want to update your contact information with us by logging into your account online at membership.wizards.com and updating your personal information. That way, you can be sure that you’ll continue to receive your free reward just for being a part of the program. In order to receive the reward for 2011, you must either have signed up for the DM rewards between April 1, 2010 and March 31, 2011, or log in to your profile to update your personal information during that time period.

In addition to your annual reward mailing, we’ll be sending you something special twice a year for DMing a minimum number of games during a 6 month cycle. Each game you DM is worth 1 point, and if you ear 5 or more points during the reward cycle ( which runs January 1 – June 30 and July 1 – December 31 each your), We’ll send you something cool that you can use in your games and show off to your friends! We send these rewards out twice a year in August and February.

Welcome to the program. We hope you enjoy the free adventure and all the great stuff to come!

Setting the letter aside on my table the next item was an ad for Dungeons & Dragons Encounters. It read “Find More Adventure Every Wednesday At A Store Near You”.

After setting the Dungeons & Dragons Encounters ad aside I saw the meat and potatoes of my Wizards of the Coast package.

So that part is a little different from the Original Tomb of Horrors that came out in 1978. The original cover of Tomb of Horrors got players from levels 10 – 14 and on the cover of this version it says “an Adenture for five 9th – level Characters.

The introduction reads to the Tomb of Horrors reads:

Somewhere under the lost and lonely hill of grim and foreboding aspect lies a labyrinthine crypt. It is filled with terrible traps and not a few strange and ferocious monsters to slay the unwary. It is filled with rich treasures both precious and magical, but in addition the aforementioned guardians, there is said to be a demilich who still wards his final haunt. (be warned that tales told have it  that this being possesses the powers which make him nearly undefeatable!)

Accounts relate that it is quite unlikely that any adventurers will ever find the chamber where the demilich Acererak lingers, for the passages and rooms of the tomb are fraught with terrible traps, poison gases, and magical protections. Furthermore, the demilich has so well hidden his lair that even those who avoid the pitfalls will not be likely to locate their true goal. So only large and well prepared parties of the bravest and strongest should even consider the attempt, and if they do  locate the tomb they must be prepared to fail. 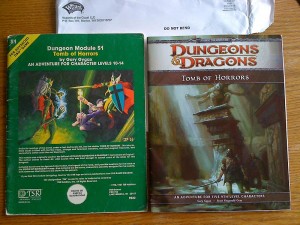 This all matches up with the original Tomb of Horrors Introduction. The following is new however.

The text above, penned by Gary Gygax, heralded Tomb of Horror’s assault on the unsuspecting hobby in 1978. One of the handful of now classic adventures modules published in the earliest days of the Advanced Dungeons & Dragons game, The Tomb made it’s first appearance three years before as the official D&D tournament adventure at the original 1 gaming convention. It used the original Dungeons & Dragons rules, published in 1974. In the time since, the adventure has become a legend in gaming circles – loved by some, vilified by others, and indelibly burned into the memories of every player and D< who set their imaginations loose within it.

In 1998, the original adventure became the centerpiece for (and was reprinted as part) the legendary Return to the Tomb of Horrors boxed set for 2nd Edition AD&D. At the height of 3rd Edition’s popularity. Return author Bruce R. Cordell updated the adventure as a free release.

Now, the most legendary dungeon crawl in gaming history has been updated for 4th Edition D&D rules. In keeping with the spirit of the new edition, the challenges herein might prove more calculated and consistent than those of the original adventure. Be warned, however, that the challenges can be just as deadly. Characters who survive the adventure should attain 11th level and will have begun to make a name for themselves as they cross from the heroic to the paragon tier.

This 4th Edition of the original Tomb of Horrors takes players from level 9 though level 11th. In fact it uses the worlds “Characters who survive the adventure should attain level 11th”. I think anyone who is not formiliar with the Tomb of Horrors should take heed of all the warnings in this adventure. The adventure booklet also continas a larg poster of the entier map thought it is not to scale for use of miniatures. The cardboard cover that the adventure sits in also contains another company of the map printed inside.

I also want to take amoment and talk about the art inside the 4th Edition of Tomb of Horrors. The art they use in this booklet is the same as the art from the orgion Tomb of Horrors. Not every single bit of art is used but most of it is that’s for sure.

Gygax designed the adventure both to challenge the skill of expert players in his own campaign, and to test players who boasted of having mighty player characters able to best any challenge.

Wikipedia also has a quote from Lore Sjöberg of Wired on Tomb of Horrors.

This is a D&D adventure created in 1978 for the purposes of testing the wit and fortitude of adventuring parties at game tournaments. “Testing” is used here in the same sense as the sentence “We’ll be testing the dog for rabies.” Let’s just say the subject is not expected to survive the procedure.

You know what? If you haven’t done it already check out the wikipeda page on the Tomb of Horrors and read the whole reception section. The point I am trying to make here is don’t just pull out this adventure module and run it for your gaming group until you fully understand what your going to put them through, and until they fully understand the warnings.  I have not even run my own party through this adventure because of that fact.

The original Tomb of Horrors is one of the best adventure modules I have ever purchased because of all the ideas it has given me for traps and map layouts. It has been difficult to try and convert the traps to a 4th edition version so this updated adventure module should be a big help.

If you would like to get free adventures and swag from Wizards of the Coast, then sign up for a DCI account in the DM Rewards program. It’s not the easyest thing to do, but the pay outs are pretty awesome.

Dungeonslayers: Tomb of the Witchking