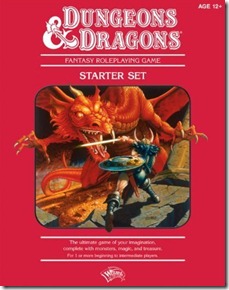 As you all know I am not that fond of D&D 4th Edition. While I loved a lot of the changes from D&D 3.5 when I first read the new core books, I didn’t like how combat worked in D&D 4th Edition. For me I totally lost immersion in the game world in the moment we started to place our miniatures on the battle map.

When they announced D&D Essentials some time back, I was at first not that interested. It looked too much like a marketing ploy. But I also had some hopes that the newbie-friendly “Red Box” would allow gameplay closer to what I am comfortable with. And while D&D Essentials will be fully compatible with the current D&D 4th Edition line, there’s some hope that the rules in the Red Box are closer to my comfort levels.

Since the box only sets me back mere 14 Euros at my favorite online shop, I thought, I should give it a chance. It’s of course possible that I will not like it, but that’s a risk I am willing to take.

Are you planning to get the D&D Essentials Starter Set, too? Or have you given up D&D completely? As always I am very interested in your thoughts on the subject.

The woes of the amateur game designer