I’ve never been particularly handy. I’ll write, talk in public, and I can tell a pretty good yarn (or so I’ve been told), but I’m not great with cars or home repair. I’ll hook up your computer or your home theater, but don’t ask me to fix the plumbing; I just don’t have the skill ranks! 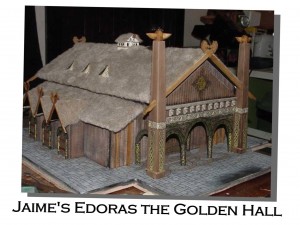 Likewise my relation with the more “arts and crafts” aspects of our hobby has been more as an observer than a participant. I have friends who paint miniatures and do so with great skill, customize their creations and produce some beautiful work. I’ve been bitten by the bug before. In high school I ordered some plastic Warhammer Fantasy minis (can’t remember the set but I know it had dwarves and skavens) and some paints and tried my hand at it for the first time. I had no notion on how this was done and even though I understood the idea of priming the miniatures I overeager to paint and did not allow the primer to dry properly. Let’s just say that attempt was less than successful.

Later, in college, I tried my hand at it again and with some coaching from those aforementioned friends.  I’ll spare you the details, but suffice it to say when I showed the final product to a friend he asked me if I had just dunked the miniature in paint and set it out to dry. End of try two!

For years I did not play with miniatures so this was no big deal, but when D&D 3rd edition came around I realized I needed some miniatures to get the most out of the combat system. I first I used my old HeroQuest board game minis, some other unpainted minis I had purchased thought a life of gaming, even some Mage Knight miniatures. My prayers were answered when the D&D miniatures came out and I was bit by the “plastic crack” bug (that’s what my friends and I used to call it). By now I have enough miniatures to play for a long, long while. 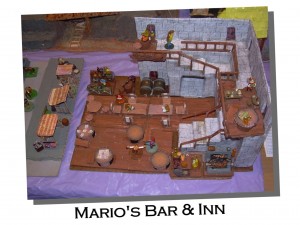 I am happy to move around the miniatures in a hand drawn map, or some of the tiles or maps made by Paizo and Wizards of the Coast. I’ve spoken about this in previous posts, but as I’ve met more fellow gamers over this past year through the Puerto Rico Role Players Group I’ve been amazed at some of the wonderful dioramas and models they create. These are labors of love that greatly enhance the feel of a game. When we had a table at a local convention promoting the group the reaction to the models being displayed was awesome.

So with another convention coming up we wanted to display some of those wonderful creations. Sadly both of the talented artists will not be able to attend the con, but both agreed to send some of their work and one of them actually offered to help us make some new terrain to display. I was reluctant at first. I’ve never been particularly handy and I saw little possibility I might actually be good at it, but never one to shy away from a challenge I said, “Why not!” What’s the worse that could happen? I end up with an ugly looking piece of cardboard that’s supposed to be a fort!

Last Saturday my friend Sara and I met with Jaime and Mario. Both make excellent models and terrains. Mario makes incredible pieces using everything from printed out models, to household items and even animal carcasses (I kid you not! You should see his dragon skeleton made from a rat’s skeleton…). Jaime, well Jaime is in a league of his own, he is a model maker, make up artist and all around great guy (Mario is a great guy too, I just don’t like to tell him too often or he’ll get too full of himself).

Jaime was an excellent teacher, providing materials, sound advice and patience, sharing his craft with us and actually getting me to do what I considered impossible, work on terrain for a role-playing game that actually LOOKS like what it’s supposed to represent. 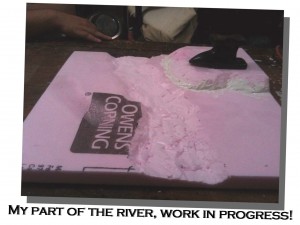 We decided to work on a river bed and Sara, Mario and I each worked on a piece of the river. We carved the riverbed in Foamular and then used the same material to create promontories, boulders and rocks. We used a heat gun to give the terrain some features. Sadly I had to leave early but Mario and Jaime put the base coat of paint on the pieces and we’ll get back together next week to finish the river using some silicone.

I am so thrilled about the experience. I actually managed to make some terrain and at the stage I left it, it didn’t look half bad. You can look at the picture here in the post. I also know it had a lot to do with the teacher. Jaime is incredibly talented and patient; communicates effortlessly and gives good solid advice and encouragement. Best of all I felt this was something I could do. I am psyched about finishing this project, displaying it at the convention and maybe tackling some other projects.

I feel like I gained a geek level over the weekend!