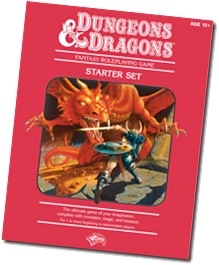 I recently got my own copy of the new Red Box. Although I am not that much interested in D&D 4th Edition, I still wanted to have a look what they’ve changed for the Essentials line, hoping that they would tone down a few of the elements I didn’t like with 4E.

Let me start with what I like. The box itself is looking great. Some people at our regular RPG pub meeting actually thought I had a mint quality 1983’s Red Box. The contents of the box are actually not too shabby either. I especially like the thick cardboard counters and the high production quality of the softcover rulebooks. The power cards are nice, but they should have used better cardboard. They look very flimsy to me. WotC also included a full set of polyhedral dice.

When it comes to the rules itself, I believe this product is a couple of years too late. THIS is exactly how and introduction to D&D 4th Edition should have looked like. The Player’s Book is a really great way to get people into the game. And from what I’ve read the other books in the Essentials line are very good, too. I especially like that WotC has decided to release the Essentials books in digest format.

But where there’s light, there’s also shadow. Alas Essentials is not a new edition of D&D but – as promised by WotC – D&D 4th Edition. Even though the new Essentials class builds are a nice touch, the problem of the dissociated mechanics is still there. And I really doubt that’s something they’re going to change any time soon. Most people currently playing D&D 4th Edition obviously don’t see this as a problem, and everyone else is more or less sold on Pathfinder or other games anyway.

I really like the new Red Box because it’s a great introductory product with an awesome production value for just a few bucks. But it’s still very much D&D 4th Edition and all of my criticisms are still valid.

More thoughts on D&D Next