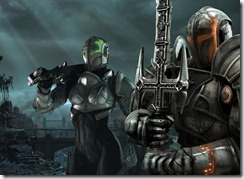 But there was still a lot to love about this game. The setting was pretty cool and in my opinion would make a great background for a pen & paper roleplaying game. In Hellgate: London demons have invaded Earth and the few survivors now hide underground mostly in subway tunnels. There are three factions who use their distinctive skills to fight the demon threat. The templars is an order of divine warriors who are excellent melee fighters. The image above depicts two templars. The cabalists are seekers of knowledge who use magic to fight the Great Dark. The third faction are the Hunters, highly trained ex-military operatives who use ranged weaponry and advanced technology. While the three classes cooperate to fight the demons, there’s also some rivalry and mistrust.

Since humanity is waging a constant war against the Great Dark, a Hellgate: London campaign is probably pretty combat-heavy. But there are a lot of opportunities for roleplaying especially when the different factions interact with each other. The setting also allows for pretty intense horror elements. While I am not sure if you can use it as inspiration for a long campaign, it should provide enough background for at least a couple of adventures. The mixture of the supernatural and high tech equipment may also hold a certain appeal to some.

While playing Hellgate: London this weekend I thought it might work to create a Warrior, Rogue & Mage variant set into the Hellgate:London universe. Using the three factions as attributes (Templar, Hunter & Cabalist) might actually work quite well, especially if you don’t mind allowing the player characters a bit more versatility than in the computer game. Alternatively I believe there are quite a few rules-light games you could use to run a campaign inspired by this computer game. Savage Worlds’ fast and furious game style might be a good fit, and the Open D6 system (especially MiniSix) might be another alternative. Heck, I think even a modified Dungeonslayers might work. If I didn’t work on too many projects already, working on a Hellgate:London campaign might be a fun thing to do.

What do you guys think? Does the Hellgate:London world have enough depth to turn it into a pen & paper RPG campaign? Please post your comments below!

Roleplaying in the world of The Elder Scrolls series

The sword is mightier than the laser gun – or is it?