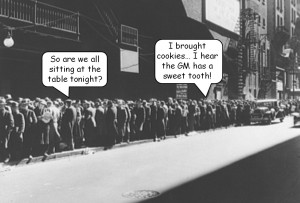 It’s hard. There I said it!

When I read the stories of people trying to find groups to play with it’s hard for me to understand. I’ve been lucky; I’ve had a regular group of players since I began playing. The numbers have waxed and waned but I’ve always had people to play with. At first I played with my neighbors, people I knew, and as people heard of the game more and more of them wanted to play. Sometimes I had eleven players around my table.

This were the good old days, when I was learning the game and adventures were wild romps of combat, looting and role playing was calling the king names! Ok I may be simplifying it but we were still learning the ropes and managing that many players was not that hard, in fact I enjoyed it.

Later still, when I had a better grasp of the game and the campaigns had become much more complex and detailed, I still had trouble saying no to potential gamers that approached me with the intent of playing with us. True that the first time we had a stranger at the table was disastrous (you can read a post about it here), but when people wanted to play at my table I felt flattered and had trouble turning them down.

That’s why at times I had twelve people sitting at my games. Back then we were playing AD&D 2nd edition mostly and we didn’t use maps or miniatures so combats were manageable. Still they took too long and on a role playing intensive campaign managing twelve storylines became, let’s say, maddening.

Eventually the numbers dwindled and we were back to a mere six players and we had a long conversation. I told my players I could not say no, so from then on, before brining any new player to the table, we’d all discuss it and come to an agreement. It would no longer be the matter of me as the game master bringing a new player to the table.

The process has worked. The group has grown, as big as eight people at one time and currently six (soon maybe to be seven), but we try to talk about it before bringing in any new players. It’s been hard, people have asked me to play with us and I’ve had to turn them down because as a group we’ve decided not to bring anyone new on board. Most of the time it has nothing to do with the people, it’s usually a matter of physical space to accommodate another body or realizing that more people at the table would slow down game play or take time away from existing storylines.

On a tangent, I’ve recently begun listening to a lot of podcasts on long dives and one of the podcasts I’ve listened to is Fear the Boot. On recent episodes (they talk about it on episode 213, but I can’t remember when they first brought tit up) they discussed the idea of screening prospective players and maybe meeting them outside of the game to see how the group gets together socially and discussing expectations about the game to make sure everybody is on the same page. I think the advice is solid and they explain it much better on the podcast so I invite you to listen to it if you are interested. But I think this is a really important point and one I’ve rarely discussed with prospective players. What do you expect from the game? What is your style as a player?

So I’m adding that to the discussion. From now on when a possible player approaches us the group will sit down, we’ll talk about it and come to a consensus, thinking of what that person expects of the game, what they want to play and whether it will be a good fit with us.

How do you handle it at your table?